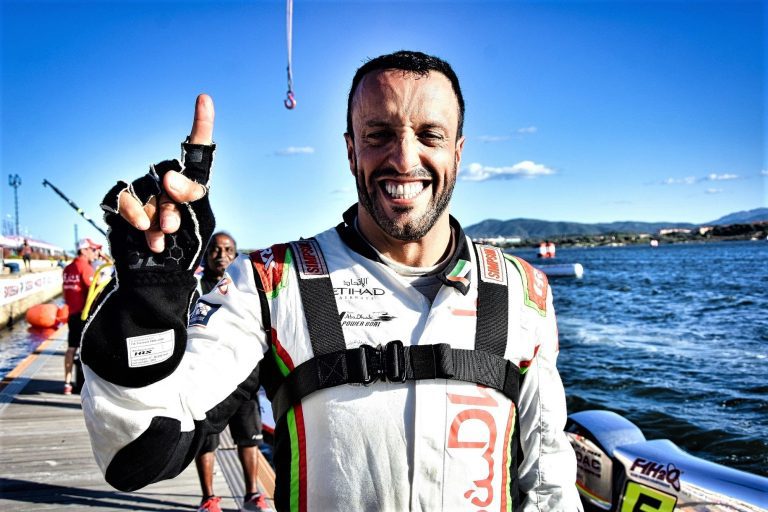 Abu Dhabi, UAE-: Team Abu Dhabi’s Thani Al Qemzi says he will give everything to secure a dream title triumph when the 2022 UIM F1H2O World Championship reaches a grand finale in Sharjah at the weekend.

Chasing a maiden F1H2O  drivers’ crown, the Emirati heads into the Grand Prix of Sharjah double header needing to wipe out a nine-point lead held by team-mate Shaun Torrente, and hold off a big challenge from Sweden’s reigning champion, Jonas Andersson, another nine points away in third.

Al Qemzi, a three-times winner on Khalid Lagoon, is relishing the opportunity to end his 20-year wait to be crowned world champion on home waters in the UAE, and to give Team Abu Dhabi a fifth consecutive team title.

“I hope this is the season where I achieve my goal to become world champion,” said the veteran driver. “It will be difficult, but I’ll be giving everything to achieve the dream.

“Khalid Lagoon is one of the most beautiful places where we race, and one of the best circuits for me. It gives you options, and racing is always very fast. Of course, I want to win for myself, but I also want to work with Shaun to secure the team title again.” Al Qemzi gave himself a fighting chance with a superb victory in the penultimate round of the championship in Italy in October.  His first target is to clinch a record-breaking fourth Grand Prix victory in Sharjah on Friday to set up a dramatic climax in Sunday’s final race of the season. Torrente, who claimed his 2018 and 2019 world titles in dramatic style in Sharjah without winning the final Grand Prix, followed up victories in France and Italy with two more podiums to top this season’s standings. “I’ve had a really amazing season,” said the 2016 winner in Sharjah. “I’ve been on the podium in every race, and if I continue like that, I have an excellent chance of a third world championship. “I love racing in Sharjah. But at the same time, Thani and Jonas have both had success there.

We’ve all won races there, so it’s very interesting. Obviously, I would like to win the first race and really lock it down, and maybe even clinch the championship, but we’ll just see how it goes.

In the build-up to Sharjah, Torrente and Al Qemzi have undergone intensive training together in Abu Dhabi under the guidance of team manager Guido Cappellini.

“Thani is my closest rival, but we’re going to maintain our friendship and rivalry within the team and push each other,” said Torrente. “If anybody else is going to win the title, I want it to be Thani. But I want my third title really badly, and I’ll push hard to get it.

“Jonas will always be a threat until he is mathematically eliminated. We’ll just take it one race at a time and hopefully come out on top, and win the championship.”