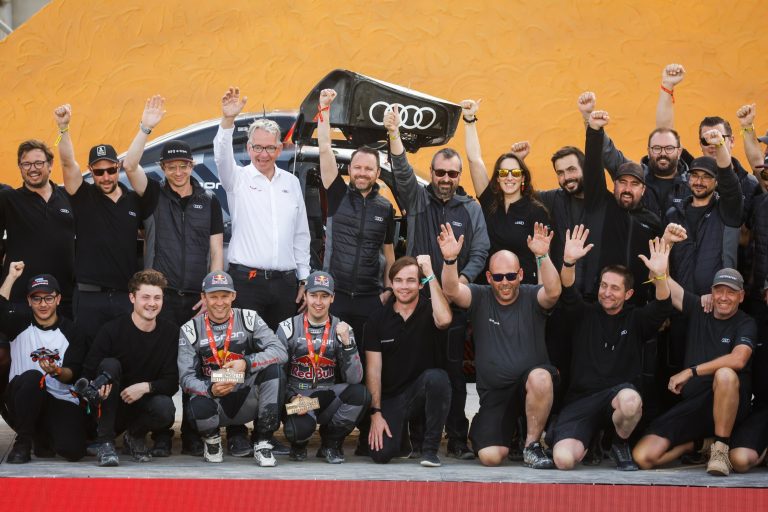 Saudi Arabia –: Team Audi Sport shaped the 2023 Dakar Rally with innovation and performance right up to the end. The Audi RS Q e-tron, with its electric drive concept, scored a total of 14 podium results on 15 event days, including the prologue. In addition, the Audi drivers led the rally in Saudi Arabia with the prototype for three days for the first time.

Oliver Hoffmann, Board Member for Technical Development at Audi, visited the motorsport team on the final weekend in Saudi Arabia and lauded many achievements: “The pace of our innovative Audi RS Q e-tron was good right from the start and also showed at the end. Unfortunately, we had some bad luck in the desert and multiple punctures. Despite the setbacks, the team celebrated its finish – the thanks to strong performances. A podium was our goal. It remains so, and we will definitely compete again in 2024.”

Mattias Ekström/Emil Bergkvist led the world’s toughest desert rally after the prologue, their teammates Carlos Sainz/Lucas Cruz on the two following days. However, a series of 14 punctures on the first four desert stages, spread across all three driver teams, cost Audi valuable time. Further setbacks followed when Carlos Sainz damaged his suspension in the scree of the third stage and in an accident on the sixth stage. Similarly, a stone invisible in the desert dust destroyed a suspension on Mattias Ekström’s car on the seventh stage. The 14-time Dakar winner, Stéphane Peterhansel, was no longer in the race at this point. After jumping off a dune, his car landed so hard that co-driver Edouard Boulanger was taken to hospital with back pain. However, all this makes the motivation and performance of Team Audi Sport in the bivouac, as well as the race truck team on the stages, all the more remarkable.

“Three stage results in the top three showed what was possible,” says Stéphane Peterhansel. The day before retirement, the French driver pairing was still in a promising position in second place overall. With Carlos Sainz/Lucas Cruz, a second Audi driver duo followed just behind in fourth place. Five times the Spaniard and his co-driver Lucas Cruz finished among the top three in the stage results until their retirement. All hopes, therefore, rested on Mattias Ekström/Emil Bergkvist. The Swedes, who are contesting only their third Dakar Rally, once again mastered the demanding competition with more than 4,200 special stage kilometres and almost 8,900 kilometres in total as the best Audi team. “It was a tough rally: we never gave up even after the high-time losses,” said two-time DTM Champion and World Rallycross Champion Ekström. “When we didn’t have confidence in the roadbook on individual days, we took some speed out, otherwise we measured ourselves against the front runners.” With great success: from the ninth stage onwards, the Scandinavians were among the top four, six times in a row. Navigating the demanding sand dunes in the Empty Quarter, Ekström/Bergkvist even achieved third and second place of the day on the marathon stage without evening service on January 12 and 13. In total, they were among the top three in the stage rankings six times during the 2023 Dakar Rally.