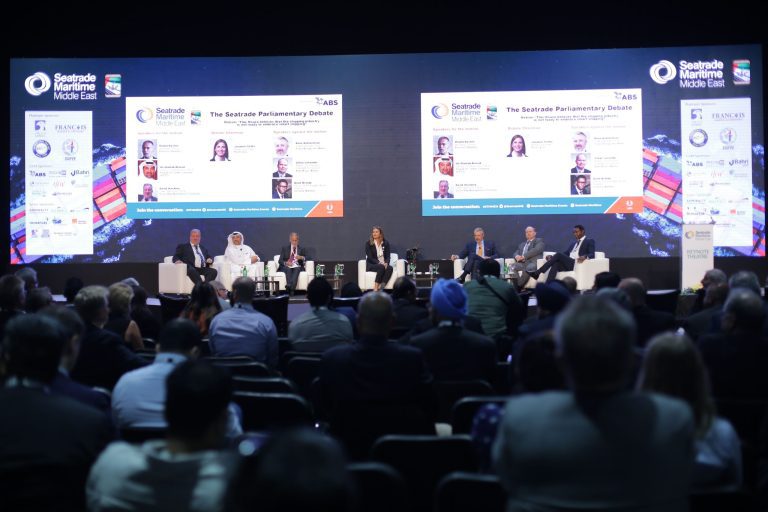 The event’s potential impact on the region’s economic progress has made it a key event for some of the leading maritime organisations and authorities across the UAE and the region.

Dubai, United Arab Emirates – : Held under the patronage of the UAE Ministry of Energy and Infrastructure, in association with Seatrade Maritime Club, Seatrade Maritime Logistics Middle East (SMLME) is all set to take place on 16 – 18 May 2022. During the course of the event, the region’s maritime sector will come together for valuable business opportunities, and also discuss a wide range of topics concerning the future of the industry.

The event’s relevance to the sector, and its potential impact on the region’s economy, has helped it gain the support of major industry players such as Bahri Marine Services, Abu Dhabi Maritime, DP World, and the Dubai Maritime City Authority (DMCA), to name a few.

H.E. Eng. Hessa Al Malek, Advisor to the Minister for Maritime Transport Affairs, UAE Ministry of Energy and Infrastructure said: “The UAE is an important contributor to the international flow of trade. Our strategic location at the crossroads of global trade routes gives us an edge over the rest of the world, cementing our position as a renowned maritime hub. Despite our advantages, we have relied upon our zest to constantly improve, and have enhanced our capabilities through innovation, advanced solutions, and state-of-the-art infrastructure.”

“Today, we rank third globally in Bunker Supply Index and Transport Services Trade; and are amongst the top five key competitive maritime hubs around the world. The credit for our achievements goes to the 27,000+ maritime companies operating in the Emirates that have constantly raised the bar for excellence. To have an event such as SMLME proves to be essential for these organisations, as it enables them to meet and interact with one another, learning and capitalising on each other’s expertise to achieve greater success,” H.E. Eng. Al Malek added.

H.E. Sheikh Saeed bin Ahmed bin Khalifa Al Maktoum, Managing Director, DMCA said: “The UAE generates a mammoth revenue worth over AED 90 billion annually through the maritime sector’s contributions. Considering the importance of the industry in terms of its economic impact, it is necessary that we invest a lot of efforts into safeguarding the sector’s interest, and enhancing its capability to attract more investments and organisations to set-up their facilities in the country. Through events such as SMLME and UAE Maritime Week, we will not only be able to discuss solutions for major issues and facilitate business deals between industry giants, but also highlight the strategic advantage the nation has for international maritime organisations, therefore attracting their attention and investments towards the country and the region as well.”

Capt. Saif Al Mheiri, Managing Director, Abu Dhabi Maritime said: “Although the world was challenged greatly with back-to-back crisis during the past couple of years, the maritime industry continued to witness a steady growth. The credit for this unusual progress goes to our resilience during difficult times, and ability to adapt quickly to changing scenarios. At our end, the focus has always been on making the best use of the available resources and advanced digital solutions to find a way out of the crisis. As we remain committed to transforming Abu Dhabi into a top global maritime hub, it is necessary to have events such as SMLME that provide opportunities for everyone in the sector to engage on a common platform and devise new solutions to solve similar challenges.”

Speaking on the significance of the event on enhancing the region’s importance in seaborne trade, Abdulaziz Sabri, Acting President, Bahri Marine Services said: “Over the past four decades of our existence in the maritime industry, we have been through various changes. However, what the world witnessed in 2020 after the outbreak of the pandemic, and in the beginning of this year after the unprecedented geopolitical situation in the north east, were by far one of the biggest challenges ever faced. Nevertheless, we continued to look for growth opportunities despite the roadblocks. Through grit, determination, and steps in the right direction, since the beginning of 2022, we have recorded a 74 per cent increase in revenue. This achievement testifies our willingness to grow and capability to drive progress despite a global crisis. Our partnerships with other industry players played a vital role in our resilience and growth. Through events such as the SMLME, we will be able to meet a lot more companies that can support us in our drive towards making this region a global maritime hub.”

Andrew Williams, President, Maritime Group, Informa Markets said: “A lot of attention is given to topics such as digitalisation and decarbonisation, and how we navigate challenges in pursuit of common targets. The regional community also tells us that sharp focus is needed on deploying the right resources that will enable success and growth. In our industry, the most important resource we have are the maritime companies that have diverse offerings, all of whom collaborate to build greater strength and resilience throughout the sector. The UAE is home to thousands of companies that make it a top-ranking maritime hub. Through SMLME, we will be able to highlight the value these organisations add to the progress of the sector in the nation, and facilitate partnerships amongst them to further catalyse growth.”

Chris Morley, Group Director, Seatrade Maritime said: “As the world continues its progress towards returning to normalcy, the maritime industry is flooded with opportunities that must be highlighted and capitalised upon. SMLME will play that significant role by connecting global industry players, who will contribute to the industry’s recovery and success. With the support of such a power-packed line up of maritime companies and authorities, our vision of driving the progress of the region’s maritime sector and making it a top revenue generator surely seems achievable.”