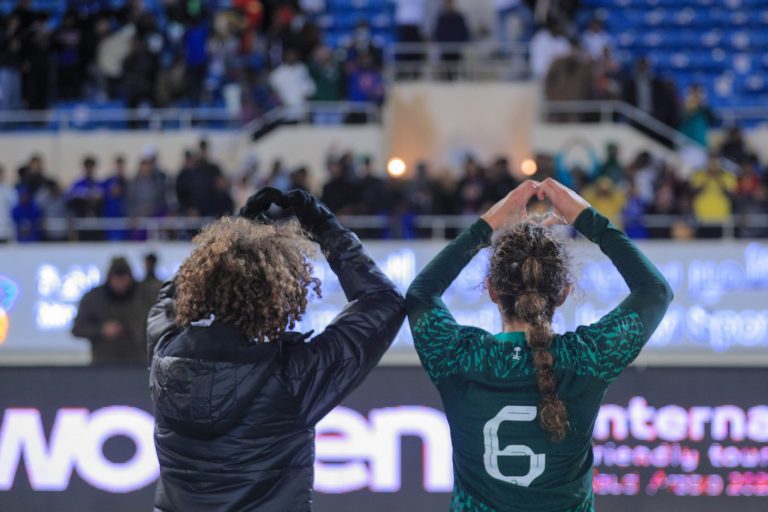 Dammam, Kingdom of Saudi Arabia – : Saudi Arabia has marked another milestone moment in the growth of football by hosting the Kingdom’s first-ever women’s 11-a-side international tournament.

In a highly notable achievement, the referee for the Pakistan versus Comoros match was Anoud Al Asmari, the first Saudi female to be included on the official FIFA referee list.

Lamia Bahaian, Supervisor of the Women’s Football Department at the Saudi Arabian Football Federation, said: “The hosting of this tournament in Saudi Arabia marks a milestone moment not just for women’s football and the growth of the game in the Kingdom, but for football itself. It is an event that can play a big role in inspiring millions of young girls across the country and the Asian continent to become involved in the beautiful game.

“The Saudi Arabian Football Federation is also delighted at the success of Anoud Al Asmari in officiating her first match as an official FIFA referee and look forward to helping develop her huge potential on the international stage. Her appointment is an important moment for football in the country and the region and provides another example of a Saudi woman in a prestigious position that can inspire girls across the Kingdom and beyond.

“We welcome each of Comoros, Pakistan and Mauritius to Saudi Arabia and wish them the best of luck in the tournament,” she added.

Al Asmari, 35, began her professional refereeing career in 2018 by officiating Saudi Women’s community league matches. Her participation at the ongoing international friendly competition in Dammam adds to the advancement in women’s football in the Kingdom, which saw the inaugural SAFF Women’s Premier League take place during the 2022/23 campaign. The top-flight competition, along with the SAFF Women’s First Division, replaced the Saudi Women’s National League for elite level women’s football in Saudi Arabia.

The international action at the tournament continues on Sunday, January 15 when Saudi Arabia play Comoros, while Pakistan face Mauritius. Thursday, January 19 sees the concluding set of fixtures with Saudi Arabia taking on Pakistan, while Comoros play Mauritius. All games are taking place at the Prince Saud bin Jalawi Stadium.

Monika Staab, the Saudi Arabia Head Coach, said: “This tournament presents enormous room for advancing football in the Kingdom – we are very proud to be expanding opportunities for our current squad of talented international footballers, while providing a pathway for future generations of Saudi Arabian girls.

“Our Green Falcons are working very hard towards the goal of entering the official FIFA rankings, and the event we are hosting will help improve standards across the board. These are exciting times for women’s football in Saudi Arabia and I would encourage all girls and women to find out more and become involved in the game,” the German added.

The friendly tournament in the Eastern Province also follows the first official women’s football championship in Saudi Arabia, when the West Asian Football Federation Women’s Futsal Championship was held in June of last year. It also comes as the country awaits a decision on its bid to host the 2026 Women’s Asian Cup, which it recently submitted to the Asian Football Confederation (AFC) in Kuala Lumpur.

To catch all the action between Saudi Arabia, Comoros, Pakistan and Mauritius, football fans are encouraged to tune in via Saudi Sports Channel (SSC), while matches will also be broadcast to the res to the world for the very first time on FIFA+. To attend the matches in person and be part of football history, please click here for tickets.