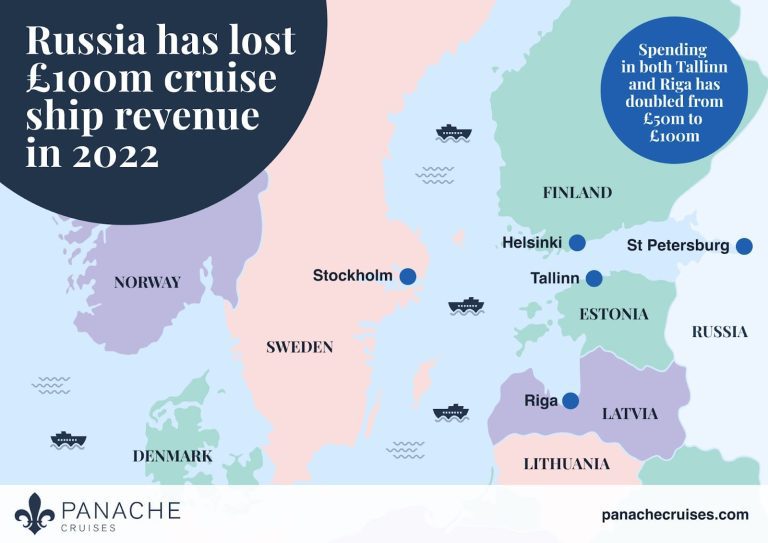 The war in Ukraine has led to a boom in tourism to eastern European sea ports as cruise ships find alternative destinations rather than visiting Russian ports.

It means as much as £100m could have been lost from the Russian economy in 2022 with tourists spending their money in Estonia and Latvia instead according to an analysis by luxury cruise retailer Panache Cruises.

Baltic Sea cruises with a stop over in Saint Petersburg have long been popular with British holidaymakers but operators are now choosing alternative itineraries for their cruise tours rather than taking tourists to Russia.

Instead they have added overnight stopovers in many Baltic ports with Tallin in Estonia and Riga in Latvia being the big winners. Thousands of UK tourists have visited these cities for the first time in 2022 aboard cruise ships.

Prior to the pandemic around 650,000 cruise ship tourists visited Tallinn each year with a similar number also stopping at Riga. Experts estimated that they were spending around £50m in each country.

But over the past 12 months the experts from Panache Cruises believe those numbers have approximately doubled to 1.3m with spending in each destination estimated at around £100m from cruise ship tourists alone.

If accurate, the analysis would mean around £100m that would have been spent inside Russia has instead found its way into the coffers of neighbouring states.

The experts believe the trend could be long lasting as cruise ship operators report overwhelmingly positive feedback from their customers on the new destinations.

A spokesman for Panache Cruises said: “The war in Ukraine has had a number of unexpected consequences for Russia and one of them being a loss of tourist revenue as far north as St. Petersburg.

“The Russian city has long enjoyed a reputation as one of the highlights of a Baltic Sea cruise but since the situation in Ukraine began to unfold, cruise companies have been seeking out alternative destinations to take holidaymakers.

“Estonia and Latvia have been the main beneficiaries with the number of cruises to both roughly doubling in number in 2022 compared to before the pandemic.

“Our analysis estimates that numbers of cruises and therefore the number of tourists visiting Estonia and Latvia instead of Russia have doubled so it’s safe to assume spending has approximately doubled also.

“Industry estimates from 2018 had cruise ship tourists spending around £50m in each location so if they have doubled this year it would mean that Russia has missed out on around £100m.

“The feedback we have had from customers on both Tallinn and Riga has been outstanding. They are both beautiful capital cities and largely unspoiled compared to more visited destinations.

“British visitors report that their money goes much further than expected when visiting these cities as costs are still relatively low compared to St. Petersburg so they represent great value for tourists.

“We see this trend continuing as long as the war in Ukraine goes on and even beyond that. It may take many years for St. Petersburg to recover in terms of lost tourist revenue.”