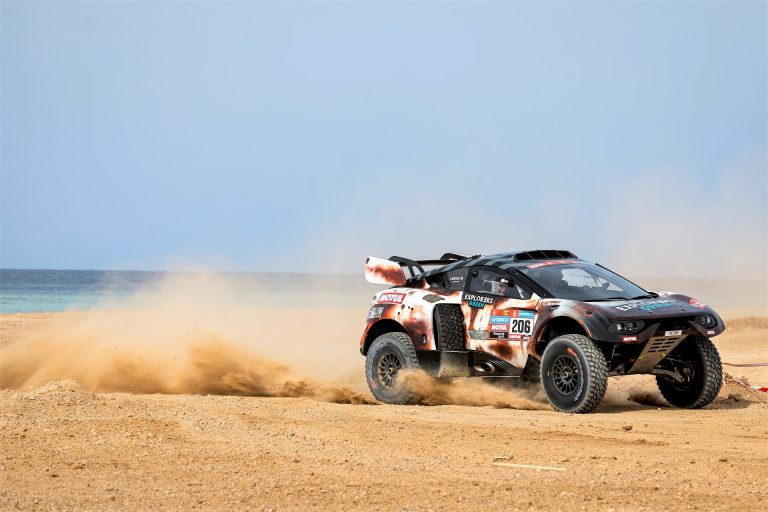 Jeddah, Saudi Arabia-: The 45th Dakar Rally is under way in Saudi Arabia, and Sebastien Loeb has given immediate notice of his desire to secure victory for Bahrain Raid Xtreme.

Partnered by Fabian Lurquin in his BRX Prodrive Hunter, Loeb is aiming to go one better after finishing runner-up in Saudi last year, and the nine-time World Rally Champion made a confident start on today’s 13-km prologue on the shores of the Red Sea.

Outpacing defending champion Nasser Al Attiyah by 11 seconds, the Frenchman was second quickest on the stage, just one second away from Mattias Ekström in his Audi RS Q e-tron.

Guerlain Chicherit and Alex Winocq, impressive winners of the Rallye du Maroc in October, set the fifth fastest time in their Prodrive Hunter, with the other BRX duo of Argentinian Orly Terranova and Spaniard Alex Haro in ninth place.

Lithuanians Vaidotas Zala and Paulo Fiuza in the fourth Prodrive Hunter suffered two punctures, but were happy to finish the prologue before real test begins tomorrow, with the first of the long desert stages that add up to 4,705kms in a route totaling 8,550 kms in length.

Loeb is clearly relishing the battle ahead with four-times winner Al Attiyah, who finished fourth on the day, and the Audi team, who also had Stephane Peterhansel in third spot on the prologue, and Carlos Sainz in sixth.

“The stage was good, no problem,” said Loeb. “I tried to push hard, but to drive like in the WRC as it’s a flat stage, like in the WRC. I tried to be efficient, and that seems to have worked.

“Of course, the prologue was nothing to compare with the rest of the stages. But it’s good to start like this. The car feels good. It’s the right set-up for the big stages. So yes I’m confident we can do something.”

Terranova, tackling his 15th Dakar after finishing fourth last year, completed the prologue to say: “The feeling was good. The speed of the WRC drivers is incredible, but we are more or less on pace. I enjoyed the stage – it was fun to drive. Now we have to complete the race ahead.”

Chicerit said: “I’m super happy and excited. As always, the first stage is not easy, and sometimes you think too much after waiting a year to be here. But now this is done and we can be focused for the first real stage tomorrow.”

Each of the four Prodrive Hunters are running on Prodrive EcoPower biofuel, created by Coryton from sustainable sources, which produces 80% less CO2 than petrol.