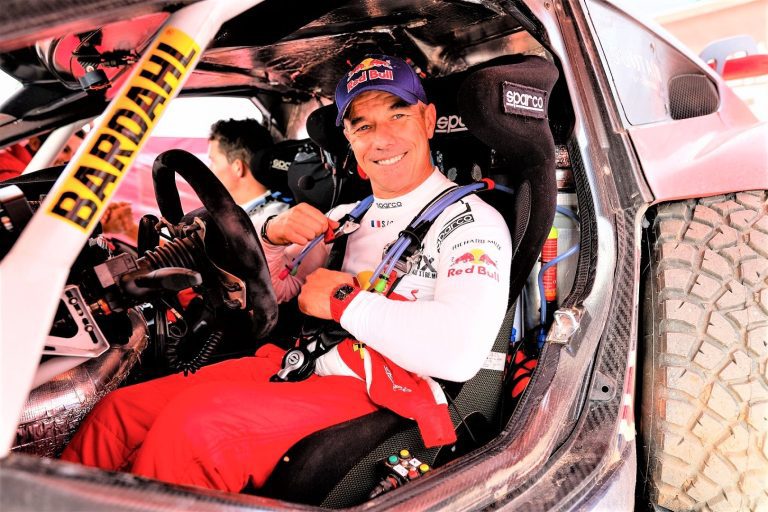 Riyadh, Saudi Arabia: : Sebastien Loeb completed a superb hat-trick of stage wins for Bahrain Raid Xtreme today as the Dakar Rally ventured into the Empty Quarter in Saudi Arabia for the first time.

Loeb and Fabian Lurquin took their BRX Prodrive Hunter to a third successive victory on the 114km tenth stage from Haradh to Shaybah, with a margin of 3 mins 4 secs from the Audi of Mattias Ekstrom and Emil Bergkvist.

Loeb’s 20th Dakar stage success was his fourth so far in this year’s event and the fifth for BRX, coming just 24 hours after an impressive 1-2-3 finish by the Prodrive Hunters.

The result strengthened his grip on third place overall, as Nasser Al Attiyah clocked the fourth fastest time on the day to finish it holding an outright lead of 1 hr 21 mins 34 secs in his Toyota over Brazil’s Lucas Moraes.

With a gap of less than 16 minutes to the Toyota of Moraes, Loeb will certainly have his sights on securing a second successive runner up spot in the Dakar over the four remaining stages.

While Al Attiyah is untouchable barring a major disaster, nine-time World Rally Champion Loeb will be looking to build on the current lead he holds in the 2023 World Rally-Raid Championship with more wins and maximum stage points before Saturday’s finish in Dammam.

Guerlain Chicherit and Alex Winocq clocked the tenth fastest time today in their Prodrive Hunter, while Vaidota Zala and Paulo Fiuza were frustrated in their bid for back-to-back second places in the third Hunter.

After finishing less than a minute behind Loeb with a splendid drive yesterday, Zala was holding second spot more than a third of the way into today’s stage before being halted by mechanical problems, which dropped him down the rankings.

The Dakar organisers kept the stage short, as it was an appetiser for the two-day Shaybah Empty Quarter Marathon Stage, where there will be a big emphasis on saving the cars.

With a 274km to come tomorrow followed by 185km on Friday, assistance trucks and mechanics are barred from the bivouac in between.