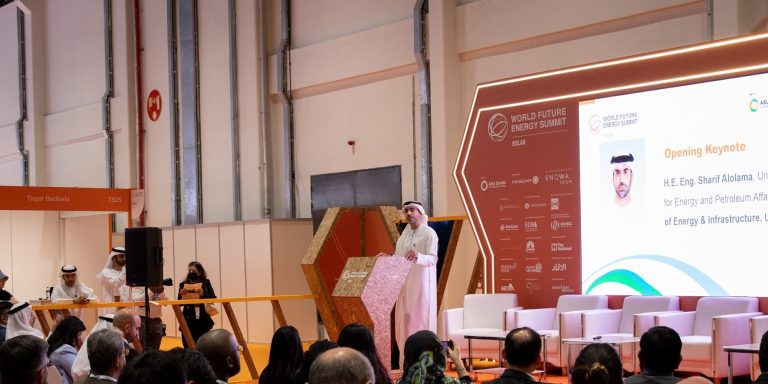 With the UAE gearing up to host COP28 in November, the vertically segmented expos and forums at the Middle East’s leading business event for future energy and sustainability focus on energy, water, waste management, solar, smart cities and climate and the environment

Opening the Solar Expo and Clean Energy Forum, His Excellency Engineer Sharif Alolama, Undersecretary for Energy and Petroleum Affairs at the UAE Ministry of Energy & Infrastructure, delivered a keynote speech detailing the Emirates’ clean energy journey since 2007, outlining the country’s ongoing commitment, and revealing diversification of the UAE’s energy mix is already underway.

The UAE has invested more than US$40billion in clean energy over the past 15 years and has plans to invest an additional US$160bn in clean and renewable energy sources over the next decade, Alolama said.

“The UAE has been at the forefront of the ongoing energy transition in the region,” he added. “We are proud that we were the first in the region to ratify the Paris Agreement, showing our commitment towards a greener economy and fuelled by a low-carbon energy system. Since then, we have followed a systematic approach to diversify our energy list and I am extremely proud to say we are refreshing our energy mix strategy as we adapt to the current energy landscape.”

Current trends predict the production capacity of clean energy – including solar and nuclear – will increase by 500 per cent within this decade, and the UAE is ready to play a considerable role in that growth. Nawal Al-Hanaee, Director of the Future Energy Department at the Ministry of Energy & Infrastructure, confirmed during a panel discussion entitled “Investing in the Energy Transition”, that the Emirates has already invested US$50bn in renewables overseas and now plans to double that figure.

At home, the cornerstone project of the UAE’s renewable programme is the Barakah Nuclear Energy Plant, which when fully operational will produce 5.6 gigawatts of clean energy round-the-clock. Supplying up to 25 per cent of the UAE’s electricity needs from a carbon-free source, it will prevent the release of up to 21 million tonnes of carbon emissions each year – the equivalent to removing 3.2 million cars from the road, or 80 per cent of the cars on UAE roads last year.

Up to 90% of Abu Dhabi’s water to come from reverse osmosis desal plants in the next decade, Summit hears

Up to 90 per cent of Abu Dhabi’s water supply will be fulfilled from low-carbon, intensive reverse osmosis membrane technology during the 2030s, the Summit’s dedicated Water Forum heard.

“New reverse osmosis technology supports reductions in CO2 emissions due to its high energy efficiency and being powered from low-carbon electricity sources rather than gas,” said Smith, who dubbed RO “the unsung hero” of desalination.

Smith’s comments come as EWEC continues its detailed technical and commercial evaluation process of proposals from Acciona, Engie, and GS Inima for the development of its new Shuweihat 4 Reverse Osmosis (S4 RO) Independent Water Project (IWP). The contract award is expected by the end of March, with the project targeted for commercial operations in Q3 2025.

The S4 RO project will use low-carbon intensive RO technology to desalinate seawater and supply up to 70 million imperial gallons per day (MIGD), equivalent to 318,225 cubic metres per day, of potable water, enhancing the security of water supply in Abu Dhabi’s Al Dhafra region. Additionally, the plant will be instrumental in ensuring an optimised and efficient water supply through the procurement of competitive RO technology.

GCC could deploy breakthrough HERS refuelling stations within a year

The 2023 Summit has also debuted the Green Hydrogen Innovation Hub, which is haloing solutions designed to accelerate green hydrogen adoption amid the regional and global energy transition. At the Hub, innovators from South Africa, Australia, the UK, USA, and Spain are presenting next-generation solutions in green hydrogen usage, finance, production, and consulting.

Among the Hub’s green hydrogen pioneers, the USA’s Ally Power revealed that its breakthrough hydrogen electric refuelling station technology platform (HERS) could be deployed in the UAE and Saudi Arabia by early 2024, following partnership talks underway at the Summit.

“If these partnerships are realised, we would see refuelling infrastructure powered by HERS deployed in the first half of next year,” said Alfred. “The stations generate electricity from steam turbines powered by the reaction of an aluminium and sodium mix, which can generate heat and release hydrogen at the same time without producing carbon dioxide.

“The Summit is proving to be a breakthrough avenue into the Middle East, which we have identified as a high potential market due to the amount of activity taking place in the green hydrogen sector and the appetite for investment in it.”

The Summit’s knowledge-sharing programme is the most extensive to date, delivering more than 200 hours of expert and informed content across specialised Forums and subjects. A highlight is the new one-day-only ENOWA ENACT conference on January 17th from the energy, water, and hydrogen subsidiary of Saudi Arabia’s flagship NEOM giga project.

“The 14th edition of the World Future Energy Summit, which continues to bridge the gap between policy and action, has produced an increased turnout both in terms of exhibitors and attendees this year,” said Leen Alsebai, Head of World Future Energy Summit, and General Manager of Summit organiser RX Middle East. “For the first time, we have dedicated forums on climate and the environment, which have understandably prompted huge interaction as a wide variety of global energy industries look to the region and particularly Abu Dhabi ahead of COP28 later this year.”

The World Future Energy Summit is hosted by Masdar and is part of Abu Dhabi Sustainability Week, a global platform for accelerating the world’s sustainable development. The event is held in partnership with ENOWA.