Empire Cinemas screens “Avatar – The Way of Water “, celebrating the opening of its seventh Cinema in the Kingdom 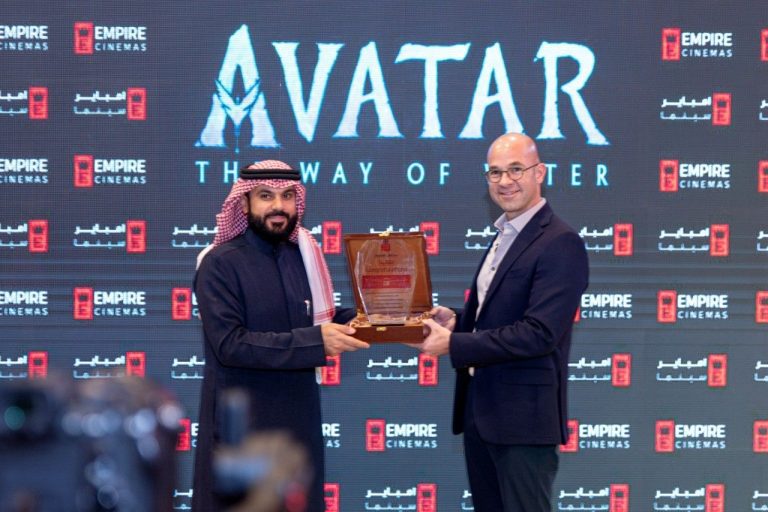 • The film grossed more than $2.9 billion after streaming the first edition, becoming the biggest hit
• Promising plans for Empire Cinemas to expand in Saudi Arabia market.

Riyadh-: The Saudi capital Riyadh witnessed the opening of the first Empire Cinemas theatre and the 7th kingdom wide, under the presence of the General Commission for Audiovisual Media and other agencies and media outlets. It screened “Avatar – The Way of Water” on its launching day in KSA. The film grossed more than $2.9 billion after releasing its first edition, which became the biggest hit at that time. Empire Cinemas – located in Othaim Mall, Khurais – is the seventh cinema in the Kingdom of Saudi Arabia. It offers moviegoers a unique experience through a multiplex, including 10 screens and a capacity of up to 970 seats. Moreover, they are equipped with modern visual and audio technologies such as Dolby Atmos sound system, so that moviegoers enjoy the overwhelming experience with full realism. In addition to the MINIS experience, a theatre dedicated for the offering them a unique experience, with a safe play zone specialized for the youngsters.

Empire Cinema is preparing to expand in several places in Riyadh and other cities, given the global importance of the Kingdom’s market to moviemakers, as Saudi cinema has had significant achievements in the last 4 years, with promising growth ahead.
In the context of the inauguration in Othaim Mall, Gino Haddad, CEO of Empire Cinemas, said that his Company entered the Saudi market in 2019 in partnership with Abdul Rahman Saad Al Rashid & Sons Group and Abdullah Al Othaim Holding, and offered a unique cinematic experience that coincided with the Kingdom’s efforts in achieving one of the most important 2030 objective that aims to build a vibrant society through the construction of world-class cultural and entertaining facilities. It also plans to expand through opening up to 15 new locations in the next 3 to 4 years, among these openings will take place in 2022 its second branch in Riyadh’s Othaim Mall in Al Rabwah area, Al-Ahsa and Medina.
Empire Cinemas will keep offering innovative technologies, equipped with global modern technologies and outstanding services to provide a one-of-a-kind cinematic experience. It is also worth mentioning that empire cinemas is the first to offer across the Kingdom 8 matchless experiences such as IMAX, Screens X, 4DX, Sphera with Flexsound, Empire Premier, Minis, Dolby Atmos and 2D Standard.