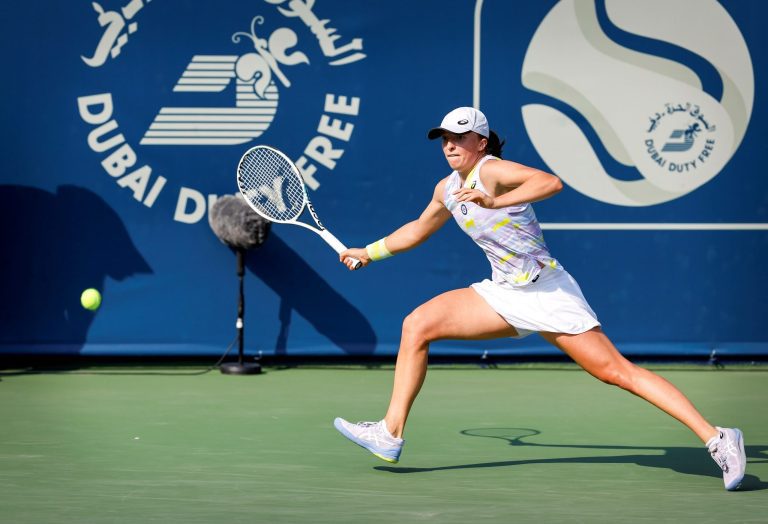 World No.1 Iga Swiatek leads a line-up that includes 14 of the best 20 female tennis players on the planet for the WTA event at Dubai Duty Free Tennis Stadium from February 19-25

Tickets for the annual Championships are available online now at dubaidutyfreetennischampionships.com with prices starting from Dh55

WTA World No.1 Iga Swiatek heads a star-starred field for the extravaganza at Dubai Duty Free Tennis Stadium, from February 19-25, which also includes Arab superstar and World No.2 Ons Jabeur; Jessica Pegula (No.3) and Caroline Garcia (No.4). Fans will get to see 14 of the top 20 ranked players in action with Latvia’s Ostapenko, winner at the Dubai Duty Free Tennis Stadium in 2022, confirming she will defend her crown.

Poland’s 21-year-old Swiatek added two more Grand Slam titles in 2022 to finish the year top of the WTA rankings, following up her second French Open title with a maiden win at the US Open. Her opponent at Flushing Meadows – Jabeur – meanwhile became the first Arab to reach a Grand Slam final when she progressed to the final at Wimbledon and again at the US Open last year. A crowd favourite, the Tunisian is the highest ranked African in tennis history.

“Each year, we strive to build on past achievements and attract the world’s best to the Dubai Duty Free Tennis Championships. With 14 of the top-20 women confirmed we have one of our strongest fields ever. This year’s tournament promises to be another highly enjoyable experience for spectators, players, sponsors and media ,” said Colm McLoughlin, Executive Vice Chairman and CEO of Dubai Duty Free.

Tournament Director Salah Tahlak added: “The field for this year’s Dubai Duty Free Tennis Championships is a fantastic mix of established stars, previous champions and upcoming talents. We are looking forward to the WTA week bringing thrilling tennis from the best in the women’s game, followed of course by the ATP men’s week.”

Tickets for the Dubai Duty Free Tennis Championships, which runs from February 19 – March 4, are on sale now online, starting from Dh55, at dubaidutyfreetennischampionships.com and will be available at the Dubai Duty Free Tennis Stadium Box Office from February 9 between 9am and 9pm daily. Tournament organisers have urged fans to secure their seats through the official platform.

The Dubai Duty Free Tennis Championships is owned and organised by Dubai Duty Free and held under the patronage of His Highness Sheikh Mohammed bin Rashid Al Maktoum, Vice-President and Prime Minister of the UAE and Ruler of Dubai.