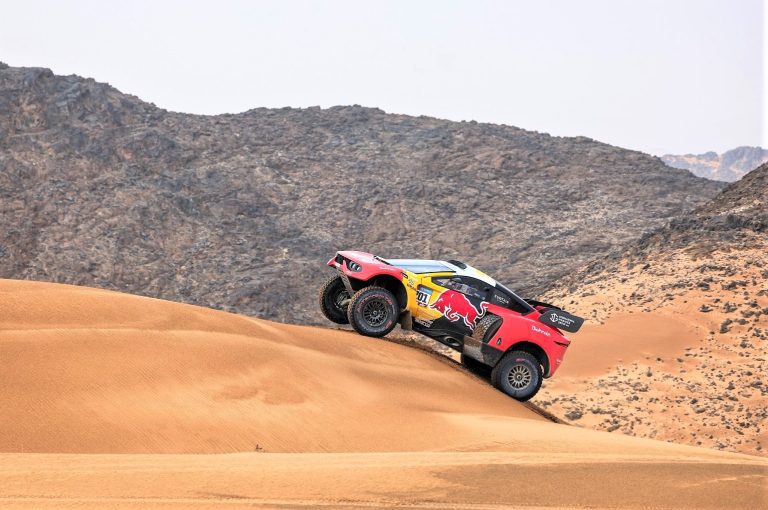 Partnered by Portuguese co-driver Paulo Fiuza, Zala was second fastest to Al Rajhi’s Toyota on the day, as Chicherit and Alex Winocq in another of the Prodrive Hunters set the third best time over the demanding 333 km stage.

Sebastien Loeb’s ninth place on the stage alongside Fabian Lurquin in their BRX Prodrive Hunter saw the Frenchman continue his climb back up the overall standings to fifth following his earlier misfortunes.

For much of the day, Chicherit had looked a likely winner, leading for a good part of the stage as he pursued a second victory of this typically demanding and unpredictable Dakar Rally.

With the bikes having a day off, the absence of their tyre tracks in the sand added to the navigational challenge, and Chicherit lost time towards the end because of a detour.

Zala moved ahead of him over that closing section through the dunes, on a stage which had earlier twisted through canyons and valleys, alternating between fast and slow sections.

Having each underlined the power of the Prodrive Hunters over the last few days, despite a spate of punctures and other setbacks, Loeb, Chicherit and Zala will all be looking to deliver more stage victories to Bahrain Raid Xtreme before the finish in Dammam on 15th January.

Loeb, runner-up to Al Attiyah in last year’s inaugural World Rally-Raid Championship, overtook the Qatari after 80km today, and will be looking to collect more valuable points in this year’s championship on tomorrow’s 346km stage from Al Duwadimi to Riyadh.

The nine-time World Rally Champion completed the stage to say: “Navigation was complicated today as we were second on the road to start. After we passed Nasser it was not easy as we were first into the dunes, and with no motor bike tracks, it was a difficult job.”

Each of the Hunters are running on Prodrive EcoPower biofuel created by Coryton from sustainable sources that produces 80% less CO2 than petrol.