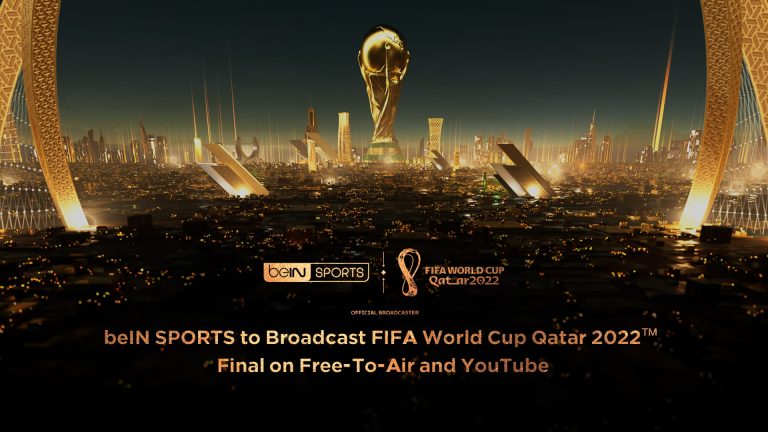 Doha, Qatar –: beIN MEDIA GROUP (“beIN”) has revealed its extensive broadcast plans for the upcoming final of the FIFA World Cup Qatar 2022™ – including live, exclusive, and multilingual coverage of 18 December’s finale between Argentina and France. The broadcast will be made available on beIN SPORTS’ free-to-air channel and, as part of its commitment to making the Arab World’s first World Cup accessible for viewers across the Middle East and North Africa (MENA), the match, as well as the entire day’s coverage, will be available to stream free of charge on beIN’s official YouTube channel.

As the official broadcaster in 24 countries across MENA, beIN has played a central role in showcasing Qatar and its ground-breaking tournament to the world this past month, with more than 5 billion accumulated views since the biggest sporting event on the planet kicked off on November 20.

Sunday’s trophy match between an Argentina side looking to secure a third World Cup title and the regaining world champions, France promises to be one of the most-watched sports events in history.

Mohammad Al-Subaie, CEO of beIN MENA said: “The final of the FIFA World Cup Qatar 2022™ this Sunday will be a historic occasion for football, for the Arab World, and for beIN. For this reason, we are determined to make sure it is available to as many people who want to watch it as possible. We started this tournament promising to provide an unrivalled viewing experience to football fans across the region and, with billions of people having tuned in so far, we can safely say we have succeeded in doing that. Now, with two games remaining, we are set to finish the tournament as we started, and cannot wait to witness – and broadcast – history as it is written.”

Ahead of the 18:00 final match kick-off inside the iconic Lusail stadium, Arabic coverage will start at 08:00 MECCA on beIN SPORTS’ free-to-air channel, beIN SPORTS MAX 1, and beIN SPORTS’ YouTube channel,  with a series of shows and countdowns, before the in-studio build-up gets underway from 16:00 to 02:00 MECCA the following day.

English live coverage starts at 11:00 MECCA on beIN SPORTS MAX 3 with the World Cup Daily, followed by a countdown show from 13:00 to 15:45 MECCA. The commentary on the final match will kick off at 16:00 until 21:45 and is available in both Spanish as well as English.

French live coverage will begin at 10:00 MECCA on beIN SPORTS MAX 5, with the live pre-match show kicking off at 15:30 MECCA direct from Lusail Stadium. Final match commentary will proceed from 16:00 until 22:30, with Sunday’s coverage being completed with a post-match show.

beIN will have the best line up of regional and international talents anywhere in the world providing the best analysis and insight into the much-anticipated Final. Sunday’s studios will include:  Mohammed Aboutrika, Tarek Al Jamala, Kaka, Marcel Desailly, John Terry, Ruud Gullit, Omar Da Fonseca and Daniel Bravo.