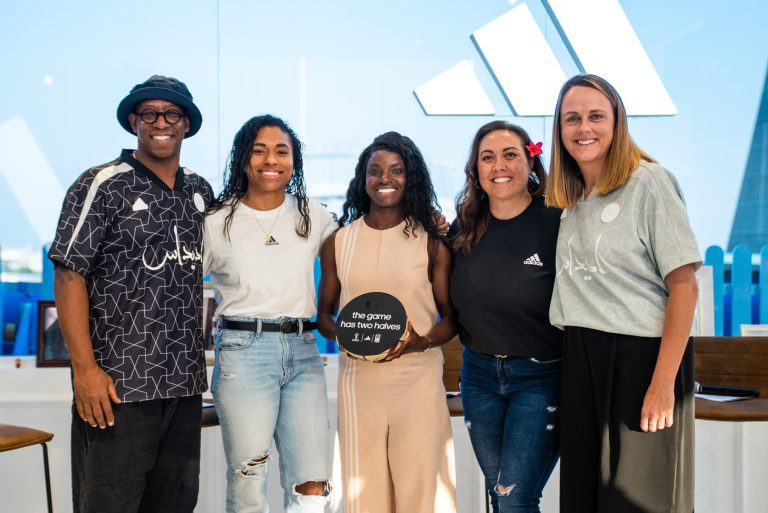 Today, adidas unveils the next step in its global partnership with Common Goal – aimed at driving gender equality in football by supporting grassroots initiatives that increase access to the sport for women and girls, on and off the pitch.

adidas’ commitment will see 1% of net sales of the official match balls from the FIFA World Cup Qatar 2022, Al Hilm, and Al Rihla, contributed towards Common Goal’s ‘Global Goal 5 Accelerator’; a collective project to increase female participation, representation and leadership in the grassroots game. The programme focuses on increasing girls’ participation as well as the proportion of female coaches and female leaders in football for good community programmes, helping to ensure that every girl participant has a female athlete role model in their community.

The announcement comes on a key moment in the football calendar. As one tournament comes to an end, another appears on the horizon as the countdown to the FIFA Women’s World Cup Australia & New Zealand 2023™ – the next big moment on the global football calendar – ramps up. Based on the insight that only 14% of Gen Z fans of the men’s World Cup will commit their support to the women’s World Cup (GWI), adidas will use the spotlight of the final to showcase the passion, skill and heartbreak that awaits fans in the half of football that continues to grow exponentially each season; in viewership and participation. Ahead of kick off on Sunday’s final, the specially created “half” Al Hilm with an important message “this is a game of two halves” will be placed in front of the world to raise importance of recognising that the men’s game is only one half of football.

The investment will facilitate the expansion of the ‘Global Goal 5 Accelerator’ across Latin America, the Middle East, Asia Pacific and Europe making a real impact for the game across the globe.

Jürgen Griesbeck, Co-Founder Common Goal, said of the initiative, “adidas’ commitment goes beyond what we believe is an important step for gender equity and in Women’s football. It is about elevating the sport to be its best self and demonstrating what its legacy could be. We hope many other brands and stakeholders move in the same direction, enabling the world’s favourite sport to unleash its full potential.”

The announcement is also paired with an important panel discussion which unpicks the barriers to access that still exists in football played by women, and the magic that awaits if those barriers are overcome – as told by US international Catarina Macario, ex-Arsenal legend and equity champion Ian Wright, and ex-England international Eniola Aluko.

“As eyes turn to next summer’s main event, we want to help ensure that women and girls that are inspired to play are able to do so, by accelerating access at a grassroots level. After all football at the highest level starts with a ball kicked on a local pitch or street” said Rachel Howard, Vice President, adidas Brand Emerging Markets. “We’re proud to support the incredible self-driven communities that are making incredible progress towards this vision. This support will be accelerated as we approach the tournament in Australia and New Zealand– to capture the appetite to play we know it will inspire – but it is a long term commitment, that will continue to deliver impact long after the tournament is over.”

adidas has been an impact sponsor of Common Goal since 2021 and today’s announcement is the latest initiative under the adidas Football Collective – a movement committed to creating change through sport. Through the adidas Football Collective the brand is joining forces with established community partners, activists and change-makers, as well as professional clubs and athletes – all to deliver real action. This is achieved through the deployment of resources to teams that give access where it isn’t readily available.