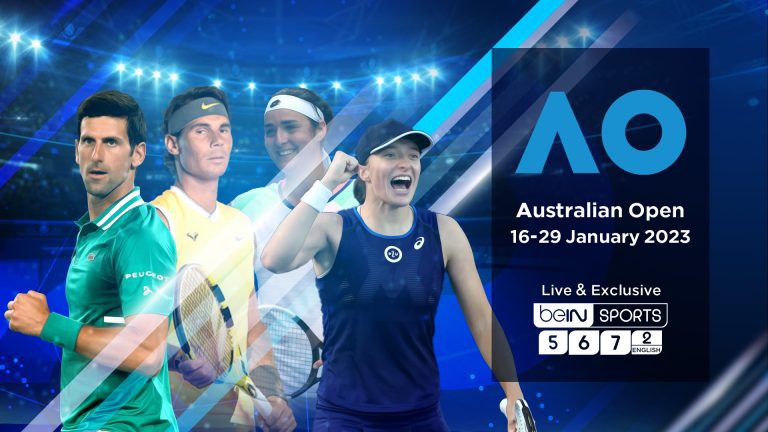 Doha, Qatar –: beIN MEDIA GROUP (“beIN”), and its flagship sports channel beIN SPORTS, has announced its live and exclusive coverage of the 111th edition of the Australian Open 2023 across the Middle East and North Africa (MENA). Tennis enthusiasts across 24 countries in the region can tune in from the opening round on Monday, January 16 to the finals on Sunday, January 29 where fans can look forward to a jam-packed schedule of over 40 hours of live action daily, broadcast across four channels in both Arabic and English.

beIN SPORTS 5, the dedicated tennis channel for the tournament, will showcase the men’s pre-finals, semi-finals, and finals from the Road Laver Arena, with both Arabic and English commentary. Meanwhile, beIN SPORTS 6 and 7 will broadcast from the Margaret Court Arena and John Cain Arena respectively. beIN SPORTS 2 ENGLISH will air a world feed with commentary in English, ensuring comprehensive coverage of all the matches.

To complement the live coverage, fans can also enjoy a variety of supporting and behind-the-scenes documentaries, previews, and daily highlights, starting with a pre-tournament documentary in Arabic on Saturday, January 14. From January 16, 14 daily highlights episodes in English will be aired, each 26 minutes long, providing mini-matches and daily updates.

The 111th edition of the Grand Slam tournament, featuring the world’s top-ranked players, boasts the largest prize pool in the tournament’s history, with over AUD $100 million up for grabs. Fans will have the opportunity to witness Spanish ace Rafael Nadal defend his men’s singles champion title, while the women’s world No. 1 Polish hopeful, Iga Swiatek, vies for the women’s title following the retirement of Australia’s popular home-grown 2022 winner, Ashleigh Barty. Novak Djokovic, former world No. 1, who was unable to compete last year after entering the country without a coronavirus jab, will also be competing for a record-extending 10th title at Melbourne Park after Australia lifted its vaccine mandate for travellers.

Arab fans can also look forward to watching Tunisian Ons Jabeur who has made history as the first Arab and African female tennis player to reach the finals at both Wimbledon and the US Open. She ended the 2022 season as the world No. 2 and is now setting her sights on a Grand Slam title at the upcoming Melbourne Park tournament. With her impressive record and determination, Jabeur is sure to make a lasting impression on the tennis world.

beIN SPORTS has been the home of tennis in the region for years. The global sports broadcaster has been providing coverage of the Australian Open since 2005, in addition to Roland-Garros, Wimbledon and US Open – as well as many Association of Tennis Professionals (ATP) and a number of Women’s Tennis Association (WTA) tournaments.