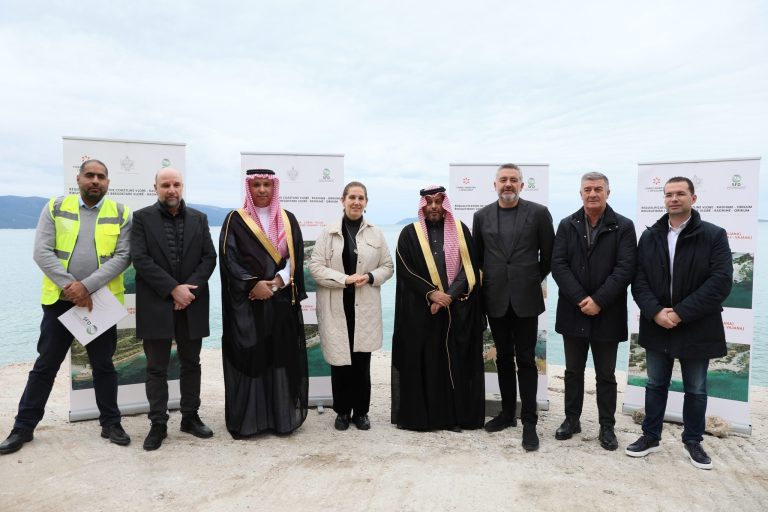 Albania – A delegation from the Saudi Fund for Development (SFD), headed by the Director General of Asia Operations at the Fund, Dr. Saud bin Ayed Al-Shammari, laid the foundation stone for the Rehabilitation and Construction of the Facilities Adjacent to the Coastal Road (Vlora – Orikum) project, in the Republic of Albania. The project is funded by SFD with a development soft loan of USD30 million.

Attendees of the ceremony included Her Excellency the Minister of Tourism and Environment of Albania, Mrs. Mirela Kombaru, His Excellency Mr. Faisal Hifzy, the Ambassador of Saudi Arabia to Albania, and other officials from both countries.

Aimed at developing the infrastructure sector in the Republic of Albania, the 11 km project aims to rehabilitate and raise the standards of service provision for the adjacent area of the beach – coastal road (vlora – orikum). This includes rehabilitating public facilities and providing essential services such as water, electricity, and sanitation to the beach areas. The project will also include the construction of a bicycle path, a pedestrian sidewalk, and parking lots with a capacity of 500 lots, coupled with the rehabilitation and development of new gardens.

In addition to enhancing trade and economic levels in the country, the project will contribute to reducing transport costs, supporting vital opportunities for direct and indirect jobs, as well as enhancing the public health of beneficiaries. The project will help achieve a number of sustainable development goals, including Goals 11, 15 and 17 concerned with creating sustainable cities and communities, improving life on land, and strengthening development partnerships to achieve the goals.

In recognition of the Kingdom’s development efforts through SFD in the Republic of Albania since 2009, H.E. Minister Mirela praised the depth of the relationship and joint development cooperation between the two countries, indicating that this project will contribute to supporting growth and creating many job opportunities.

His Excellency Mr. Faisal Hifzy, the Ambassador of Saudi Arabia to Albania, pointed out the importance of this project and its impact on Albanian citizens, reflecting the commitment from Government of the Kingdom of Saudi Arabia through the Fund to support development projects in different countries, including the Republic of Albania, which has close ties to the Kingdom.

Commenting on the project, Dr. Saud Al-Shammari noted that this project signifies the commitment from the government of the Kingdom of Saudi Arabia, through SFD, to supporting development projects in the Republic of Albania. He praised the joint development efforts with the Republic and wished the Albanian government and people further progress and prosperity, emphasizing that this project signifies great development in the country.