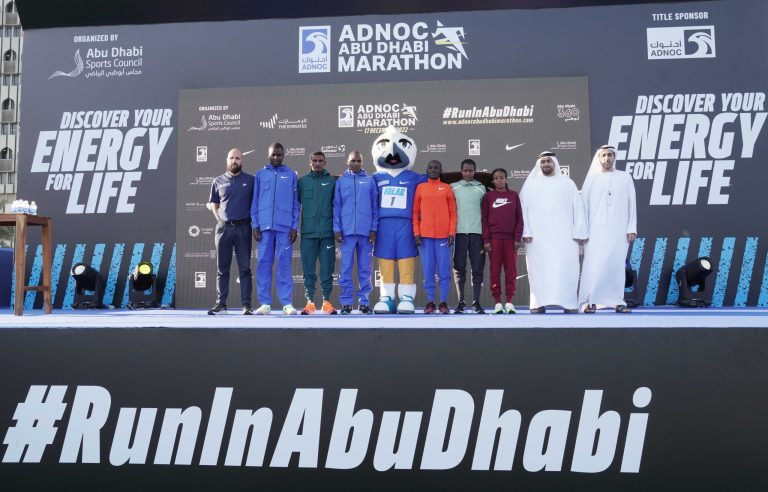 Abu Dhabi, United Arab Emirates –: Some of the world’s best long-distance athletes will be among a record 20,000 participants when the 2022 ADNOC Abu Dhabi Marathon gets underway tomorrow morning, December 17, on a new course that snakes its way through the streets of the UAE Capital.

Abu Dhabi Sports Council announced in a press conference at ADNOC Abu Dhabi Marathon – Event Village that Ethiopian Adeladlew Mamo, winner of this year’s Seville Marathon, joins the field alongside Kenyan pair Daniel Kibet, winner of the 2019 Istanbul Marathon, and Dickson Chumba, champion in Tokyo in 2015 and 2018, as well as Chicago in 2015.

Moreover, Olympian Eunice Chumba has also been added to the elite runners line-up. She will be looking to add the Abu Dhabi title to a collection that includes the 2017 Beirut Marathon. Chumba will face competition from, among others, 2016 Olympic bronze medallist Mare Dibaba of Ethiopia and Kenya’s Angela Tanui, winner of the Amsterdam 2021 Marathon.

Mohamed Ahmed Al Remeithi, International Events Section Head: “The ADNOC Abu Dhabi Marathon has established itself as a staple sports event on the country’s annual sporting calendar. The fourth edition of the event will see the launch of a new track that passes several the emirate’s most prominent landmarks in Abu Dhabi. The ADNOC Abu Dhabi Marathon has attracted 20,000 registrations this year, indicating its strong position on both a local and international scale and further reinforcing the impact the marathon has on society in the UAE.

“The preparations are all set to provide a successful experience for participants of all levels: from elite runners to participants in the various community races. We wish all participants, both local and visitors to the Emirates, a good stay in Abu Dhabi and a success day.

“Abu Dhabi Sports Council provides initiatives, events and programmes that further support all segments of society in order to achieve strong sporting participation, which creates a positive impact on improving physical fitness and contributes to the happiness and wellbeing of society,” AlAreefi added.

The fourth edition of the ADNOC Abu Dhabi Marathon includes the full 42.2km marathon, and the relay marathon in which two runners each cover 21.1 km, in addition to 10km, 5km and 2.5km races under the name “We Run Together” and which are open to all. The marathon starts in front of the ADNOC Headquarters and passes through some of the UAE capital’s most famous landmarks of the UAE capital.

The opening ceremony will see the spellbinding Al Fursan aerobatics team carrying out spectacular aerial shows. The team will fly, tumble and twirl through the air, painting the sky with smoking trails of green, white, black and red above the ADNOC Abu Dhabi Marathon race circuit, offering the spectators yet another treat.

The ADNOC Abu Dhabi Marathon Event Village is open until December 17 and will include entertainment for all the family. Among these are the Fitness First warm-ups, hourly shows and live music to enjoy, while you can sample any number of cuisines at the extensive food trucks on offer.

There are also several exciting activities and activation plans, including the Daily Mile, which challenges visitors to a 15-minute treadmill run, a human running wheel, and the running energising panel.

Fitness fans will be able to test their skills in a cycling challenge whereby they must ride as fast as they can and maintain the speed to obtain a prize. Falah Al Tamima, the official event mascot, will also be present inside the Event Village as he continues his roadshow around the city raising awareness of the annual race.

A total of 26 trophies will collectively be awarded to the first, second and third place finishers of the respective marathon races. Meanwhile, 24 trophies will be given to ADNOC employees, with a further 30 awards handed out to partners and sponsors.