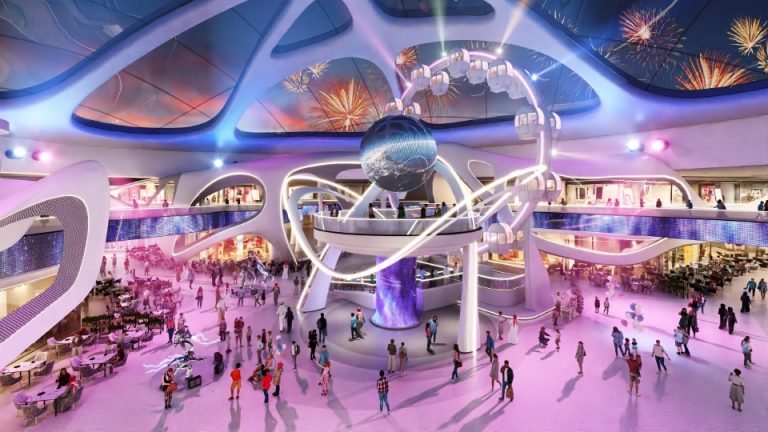 Riyadh, Saudi Arabia-: Saudi Entertainment Ventures (SEVEN), a wholly owned subsidiary of the Public Investment Fund (PIF), has announced its commitment to invest SAR 50 billion to develop 21 integrated entertainment destinations with over 150 innovative attractions, in partnership with prominent international brands, across 14 cities in Saudi Arabia. Construction of SEVEN’s first entertainment destination in the Al Hamra district of Riyadh has begun.

The announcement comes at the same time as rapid growth within the Saudi entertainment sector, and the country’s efforts to consolidate the position of the sector in order to diversify sources of income, create jobs, contribute to raising the quality of life for citizens and residents, and improve the ranking of Saudi cities among the best cities globally.

He added: “We believe that the entertainment sector in Saudi Arabia is full of opportunities and plays an important role in the growth of the local economy. It also forms a strong basis for creating jobs and is a strong driver for a large number of other economic sectors including the local tourism sector. We will provide opportunities for local SMEs, develop Saudi talent, localise technical expertise and transfer knowledge through our global partnerships.”

SEVEN’s entertainment destination in Al Hamra, which has an investment value of more than SAR 3 billion, is set on a land area of ​​more than 90,000 square metres with a built-up area of ​​167,000 square metres and occupies a strategic location at the intersection of the Eastern Ring Road and King Abdullah Road. SEVEN Al Hamra is expected to attract 6 million visitors per year by providing world-leading entertainment attractions.

SEVEN has awarded Shapoorji Pallonji, one of the largest engineering, procurement, and construction conglomerates in the region, to undertake the construction and management of the project. The agreement was signed by Abdullah AlDawood, Chairman of SEVEN, and Vidya Sagar, Vice President of Shapoorji Pallonji, at a ceremony held at the SEVEN Al Hamra site.

M.D. Saini, Managing Director and CEO of Shapoorji Pallonji, said: “Saudi Arabia, through Vision 2030, has ambitions to become one of the best places to live and visit in the world. We at Shapoorji Pallonji feel honoured that SEVEN chose to partner with us on this ambitious and path-breaking venture. We are already executing multiple projects in Saudi Arabia and this project will certainly add significantly to our business portfolio and further establish our long-lasting legacy in Saudi Arabia.”

SEVEN has partnered with leading companies in their fields to design these entertainment destinations including AOA, CallisonRTKL in collaboration with Thinkwell, WME and Ellis Don.

SEVEN’s entertainment destinations are strategically located to serve the wider population of Saudi Arabia, ensuring that they are easily accessible by all. The upcoming projects will be located in Riyadh, Kharj, Makkah, Jeddah, Taif, Dammam, Khobar, Al Ahsa, Madinah, Yanbu, Abha, Jazan, Buraidah, and Tabuk.

Saudi Entertainment Ventures, a wholly owned subsidiary of PIF, is mandated to invest in, develop, and operate entertainment destinations and create a sustainable entertainment sector that caters to the needs of all in Saudi Arabia, in accordance with the highest and latest international standards.