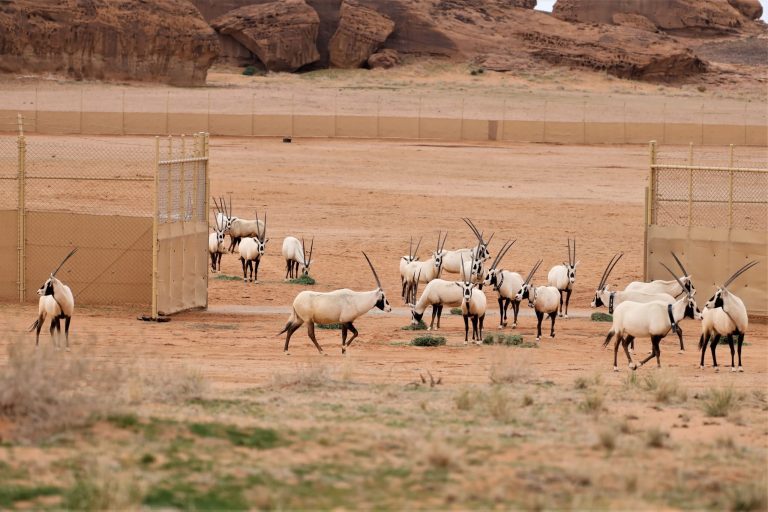 AlUla, Saudi Arabia-: The Royal Commission for AlUla (RCU), building on the successful earlier reintroductions of native species into their ancestral habitat in north-west Saudi Arabia, has embarked on its biggest animal release.

This is by far the largest release since RCU’s reintroduction programme began in February 2019. The programme’s formation of core conservation zones for native vegetation, development of new infrastructure including quarantine enclosures, site readiness studies, and the monitoring of prior releases – through satellite tracking collars, camera trapping and the work of the RCU ranger force – have all enabled this growth. RCU’s scientific studies and advance preparation laid the groundwork for a five-fold increase compared with the total number of animals released earlier in 2022.

Animal reintroduction enriches RCU’s ambitious plan to activate six nature reserves while regenerating AlUla as a leading global destination for cultural and natural heritage. The six reserves will span more than 12,400 sq km – an area larger than Lebanon. The expanded reintroduction is an indicator of the reserves’ progress because released animals thrive only when the ecosystem is sustainable.

Dr. Stephen Browne, Wildlife & Natural Heritage Executive Director of the Royal Commission for AlUla, said: “Following international best practice, RCU is unleashing the power of nature’s balance. We are a growing player in conservation through biodiversity initiatives including species reintroduction, habitat restoration, protected area management and Arabian Leopard conservation. RCU’s conservation and restoration initiatives are successfully moving forward in the revitalisation of AlUla’s natural habitat – and one day we will reintroduce the Arabian Leopard back to the wilds of AlUla.”

The reintroduction of the Arabian Leopard, an apex predator, would serve as a capstone on the reserves’ regeneration and is targeted for 2030. The International Union for Conservation of Nature (IUCN) classes the Arabian Leopard as critically endangered in the wild.

IUCN guidelines state that post-release monitoring is essential for any reintroduction program. Monitoring of the newly released animals will be carried out with SMART software analysis tools, camera trapping and satellite tracking collars. This is the first time that the lightweight, solar-powered collars will be used for ungulate species in the region. Increased monitoring will accelerate RCU’s research and understanding of balance within the ecosystem, allowing for future releases and better management of the animals’ natural habitat.

Yousef S Alfaifi, RCU’s zoologist, said: “RCU’s animal reintroduction is conducted in line with best practices and IUCN guidelines, including quarantine before release, monitoring after release and in-depth analysis of the monitoring results. RCU’s Wildlife and Natural Heritage department takes a world-leading, socially responsible approach to conserving the biodiversity and natural heritage of AlUla through the restoration of habitats and reintroduction of native wildlife.”

The released animals have been sourced from respected conservation sources in KSA and the UAE. RCU has conducted extensive genetic, physical screening of the animals and health checks to ensure their fitness for release into the wild.