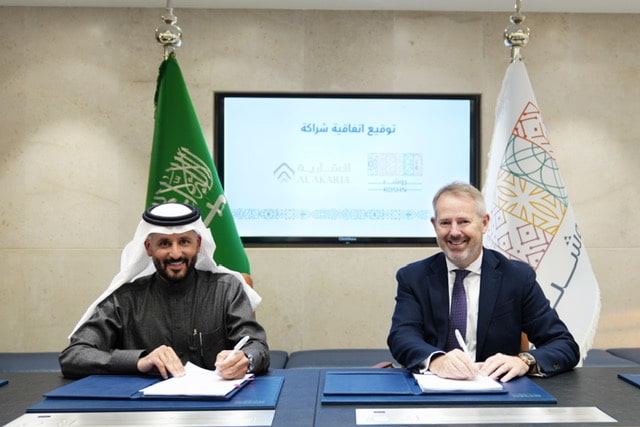 Riyadh – : ROSHN, the nation’s leading real estate developer, and the Saudi real estate company, Al-Akaria, have signed a sale and purchase agreement valuing SAR 323.7 million that will see Al-Akaria develop residential villas within SEDRA, ROSHN’s flagship community in Riyadh. The deal follows a SAR 142-million-riyal land sale to Al-Akaria announced earlier this year and will add to the variety of high-quality housing units available in the development, which is enlivening northern Riyadh with its unique mix of integrated, walkable residential neighbourhoods supported by world-class amenities.

“Strategic partnerships are a key pillar for achieving ROSHN’s goals. Our agreement with Al-Akaria enables us to contribute to the government’s drive to increase homeownership in the Kingdom and is an important step towards ROSHN’s goal of developing the domestic real estate sector,” said ROSHN Group CEO, David Grover.

As it rolls out its new way of living across the nation, ROSHN is forming strategic partnerships with consultants, main contractors, sub-contractors and suppliers, ensuring that its customers have access to the best products and services in the market. ROSHN’s extensive partnership programme is also boosting local economies and the national real estate sector by providing investment opportunities, catalysing supply chains, and creating new jobs.

Mr. Ibrahim Al-Alwanai, CEO of Al Akaria, said: “Strategic partnerships are considered one of the most important factors for growth and development, especially in the real estate sector, and we are delighted, at Al-Akaria, to work with ROSHN on the development of the ground-breaking SEDRA community.”

SEDRA, ROSHN’s first project in the Kingdom, has been delivered ahead of schedule and when completed will provide homes for 130,000 inhabitants. It features neighbourhoods packed with amenities that support a well-balanced, fulfilling lifestyle – including cycling routes, parks, sports areas, health and education infrastructure, shopping malls, cafes and restaurants, and mosques.

The Sale and Purchase Agreement brings together two of the real estate sector’s leading institutions.  Al-Akaria is majority-owned by the Kingdom’s Public Investment Fund and has been a leader in the real estate ecosystem since its establishment in 1976. The company develops residential and commercial real estate for sale or lease, manages real estate for third parties, undertakes contracting work for buildings, and purchases, produces, sells, and leases materials and equipment necessary for construction.

ROSHN is a national real estate developer, powered by Saudi Arabia’s Public Investment Fund (PIF). Its developments are unprecedented in scale in Saudi Arabia and will generate vibrant new communities in 9 cities across four regions, including Riyadh, Jeddah, Al Kharj, Al Hofuf, Al Qatif, Makkah, and Abha. Following the successful opening of its flagship SEDRA development, ROSHN has brought its vision for a new way of living to the Kingdom’s west coast, with the launch of Jeddah’s ALAROUS. ROSHN builds communities that look both to Saudi heritage and the evolving aspirations of the Saudi people, acting as the master developer, property developer and operator across a broad range of asset classes and land uses, including residential, retail, commercial, hospitality and public/civic facilities.