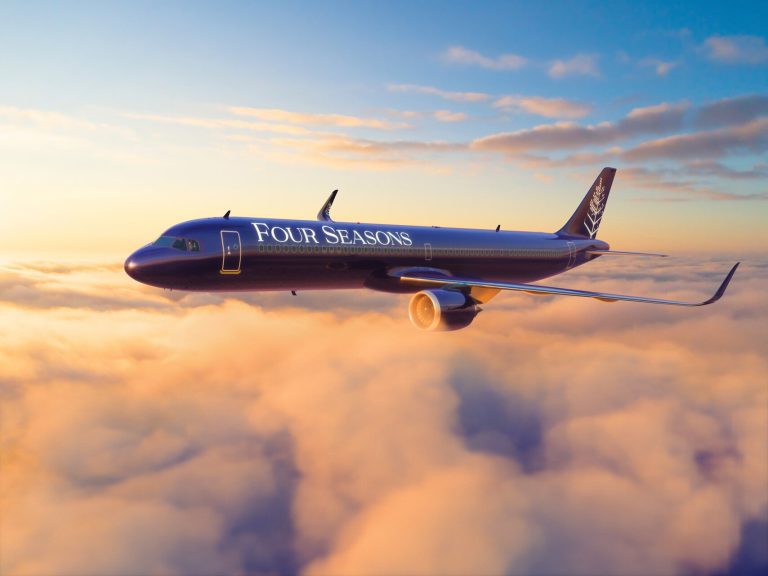 Toronto, Canada – Leading luxury company Four Seasons reveals the next set of Four Seasons Private Jet Experiences for 2024, featuring a collection of extraordinary journeys to far-reaching destinations across the globe, all in the comfort and care of Four Seasons on the ground, and in the air.

“Since launching the Four Seasons Private Jet Experience seven years ago, we have taken guests on 20 journeys through 35 countries, often including remote destinations rarely visited by tourists, and showcasing the very best of great cities, important landmarks and nearly-untouched wilderness locations in ways that only Four Seasons can,” says Marc Speichert, Executive Vice President and Chief Commercial Officer at Four Seasons. “A focus on the guest experience is always at the centre of our innovating and decision-making.  Feedback from our guests – including many who have joined us for a second, third or even fourth journey – continues to shape the experience, from the custom-design of the new Four Seasons Private Jet to the introduction of shorter itineraries, such as Asia Unveiled for time-challenged travellers who want to experience more in less time, and the family-focussed African Wonders.”

This year, Four Seasons added 10 new destinations to the program, including Antarctica with the debut of the Uncharted Discovery itinerary currently underway, and Easter Island as part of the Ancient Explorer itinerary – both of which are offered again in 2023 and 2024 – while eight more new destinations feature in itineraries over the next 18 months, including Fort Lauderdale, Taormina, New Orleans, Costa Rica, Bogotá, Johannesburg, Mauritius and Tokyo.

In addition to four journeys already announced for 2024 Four Seasons continues to add to the calendar with the return of three popular trips later in the year.

Meet fellow travellers at a welcome dinner in Fort Lauderdale before heading to the Mexican capital, where diversions include an after-hours museum visit or a hot air balloon ride over the Aztec city of Teotihuacan.  On Easter Island, travellers can hike and cycle among the remarkable moai statues before flying farther across the Pacific and enjoying the glorious tropical paradise of Bora Bora.  There, the fun continues with submarine scooter rides through the lagoons, and more.

Then it’s off to Australia, where divers and snorkellers will enjoy a private cruise to the Great Barrier Reef, while land lovers can explore the ancient Daintree Rainforest in the company of an Aboriginal guide.  Next, see Bangkok in a whole new way during a private klong cruise before settling into an evening of cocktails at one of the World’s 50 Best Bars at Four Seasons.  Jetting westward to the Middle East, travellers will visit both Petra and the Pyramids before heading to the Athenian Riviera and the Parthenon.  Finally, guests arrive in the pulsing capital of Spain, staying of course in the heart of it all at Four Seasons Madrid, before saying their final goodbyes.

One of the original Four Seasons Private Jet Experiences remains one of its most popular, and for good reason.  Taking off from Seattle, the first stop is the ancient imperial city of Kyoto, where travellers can explore numerous UNESCO World Heritage sites, and take in the breath-taking beauty of the 800-year-old ikeniwa (pond garden) within the grounds of Four Seasons.  In central Vietnam, guests can opt for a culinary tour by Vespa, wander the charming town of Hoi An, or take a cooking class at Four Seasons Cooking Academy, knowing there will be plenty of time to relax at the next stop on the Kuda Huraa atoll in the Maldives.

From there, it’s off to the Serengeti where game drives take on new meaning as guests follow the herds with cameras in hand, or take in endless panoramas during a sunrise hot air balloon ride.  After arriving in Marrakech, many guests will have spent hours in the souks and the medina, while others will want to opt for a day trip to a Berber village in the Atlas Mountains.  Then it’s time to jet off to Budapest, where one can indulge in the famous thermal baths, and then on to Tuscany, where an after-hours visit to see Michelangelo’s David, leisurely lunch at a winery or a truffle hunting expedition are all on the menu.  The trip ends with a farewell dinner in the culinary capital of the world, Paris.

A recent addition to the portfolio, Four Seasons immerses guests in one of America’s most popular cities with a private streetcar tour of New Orleans.  Then it’s off to the beaches and jungles of Costa Rica, where Four Seasons has just introduced an extensive adventure course for active travellers, while others might enjoy a round on an Arnold Palmer golf course, or perhaps a rum and chocolate tasting experience with local experts.  Next, Four Seasons guests go from private jet to chartered train on a journey to Cusco and Machu Picchu in the Andes before heading across the continent to Buenos Aires.  There, they can enjoy the nightlife the city is known for, or perhaps spend the day in the country enjoying an asado lunch and traditional gaucho show.

A true highlight of this itinerary takes guests on a four-night Antarctic expedition aboard a luxury polar ship and guided exploration of astounding glacier-sculpted landscapes.  Back north again, a stop in Bogotá includes a private performance from the renowned Bogotá Philharmonic before the custom-designed Four Seasons Private Jet makes its final stop on Paradise Island in the Bahamas, where travellers can raise a toast to new friends in a bar where James Bond himself ordered his Martini “shaken, not stirred” in Casino Royale.

Designed with families in mind and also popular with couples and single travellers, this itinerary is both educational and awe-inspiring as guests visit ancient wonders, breath-taking landscapes and more.

Asia Unveiled is an all-new shorter trip of 16 days within one region, allowing guests to do more in less time with a variety of cultural and culinary experiences, plus plenty of time to relax and recharge along the way.

A perennial favourite of Four Seasons travellers, this 24-day itinerary offers a broad array of experiences in diverse destinations, from a private yacht tour of Sydney Harbour to a special day trip to the incredible Taj Mahal and sunset cocktails on the 122nd floor of the Burj Khalifa.

One of the original Four Seasons Private Jet Experiences, this itinerary takes guests to remote islands including the Seychelles and the Galápagos, while also showcasing dynamic cities such as Kyoto, Marrakech and Bogotá as only locally-based Four Seasons teams can.  Previously ending in Miami, as of 2024 this itinerary will conclude at the just-opened Four Seasons in Fort Lauderdale.

Select Four Seasons Private Jet itineraries in 2023 also have limited seats available for booking. Visit the website to learn more, and email fourseasonsjet@fourseasons.com to inquire about availability and waitlist opportunities.

All announced itineraries will take place aboard the new, custom-designed Four Seasons Private Jet. Fully tailored to Four Seasons exacting specifications with input from previous journey passengers, the Airbus A321neo-LR aircraft offers the widest and tallest cabin in its class, featuring a 48-seat interior configured for even greater comfort. On board the custom-designed Four Seasons Private Jet, an experienced flight crew is joined by a journey crew including a dedicated Concierge, Executive Chef and Physician.

Both in the air and on the ground, Four Season delivers a flawless, fully immersive experience from the moment a guest books their trip to their return home. From itinerary planning and car transfers to luggage services and visas, Four Seasons staff will see to it that every detail is taken care of, allowing guests to focus on the true joys of travel, not the hassles and logistics of multiple connections, layovers and delays.

Learn more about the Four Seasons Private Jet Experience and continue to explore by following the #FSJet hashtag on Twitter and Instagram for the latest news and traveller experiences.