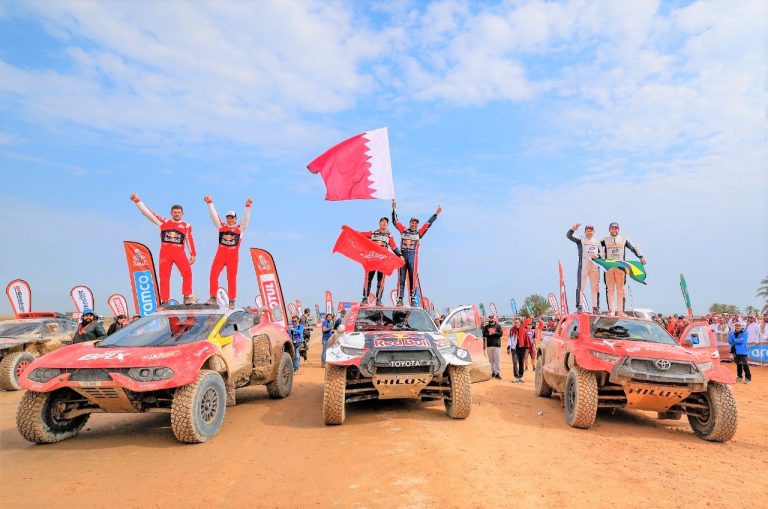 Guerlain Chicherit and Alex Winocq took the final 136km stage from Al-Hofuf to Dammam for their second success in this year’s event, and a ninth Prodrive Hunter win out of 14 stages in the toughest Dakar since the rally moved to Saudi three years ago.

After powering his BRX Prodrive Hunter into the record books with a sixth stage victory in a row 24 hours earlier, Loeb coasted to the finish in Dammam to secure his second successive overall Dakar runner-up spot with co-driver Fabian Lurquin.

While Al Attiyah and Mathieu Baumel won by1 hr 20 mins 49 secs overall in their Toyota, Loeb’s fourth fastest time today, following seven stage wins overall, gave him a two-point lead over the Qatari after the first of five rounds in the World Rally-Raid Championship (W2RC).

The nine-time World Rally Champion said: “Congratulations to Nasser and Mathieu, and Toyota. They’re great rivals to fight with on the stages. We look forward to the next battle.”

That will come in next month’s Abu Dhabi Desert Challenge, where Loeb will look to build on his W2RC lead, with further rounds to follow in Mexico, Argentina and Morocco.

The Frenchman will carry a great deal of confidence forward, after the BRX Prodrive Hunter provide itself to be more than a match for all its main rivals over some of the most demanding desert terrain on earth.

Having started with a New Year’s Eve Prologue on Saudi’s Red Sea Coast, the 45th Dakar Rally presented a daunting series of challenges along a rout of almost 5,000km, and the Hunter passed every test with flying colours.

While a series of punctures and other setbacks ultimately frustrated Loeb’s bid for a first Dakar triumph, it seems only a matter of time before more wins arrive to add to those he secured in Andalucia, and Chicherit produced in Morocco, three months ago.

Chicherit’s second stage win today underlined the power of his top flight challenge in one of the Prodrive Hunters that ran throughout the event on EcoPower fuel, which reduces greenhouse gas emissions by 80% compared to petrol.