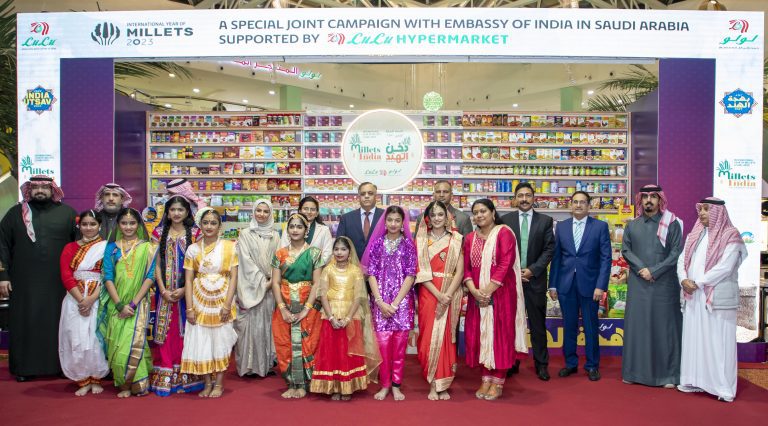 KSA: The LuLu Group launched India Utsav, a celebration of Indian commercial ties with KSA and festival of India’s popular cuisine as part of the 74th Republic Day of India which falls on January 26th.

More than 12,700 Indian items will grace the aisles of LuLu across Saudi Arabia – from popular FMCG products, Lulu Pvt label’s products, Indian fruits & vegetables to household goods and garments. Moreover, LuLu is putting a spotlight on a huge range hot foods freshly prepared in store for the entire promotion, from biryanis to curries, popular street foods, traditional sweets and many more delicacies.

Indian Ambassador Dr. Suhel Ajaz Khan praised the role of Lulu Group and its retail operations in promoting Indian essence worldwide. “The LuLu Group’s promotion of Indo-Saudi commerce and cultural links has brought pride and honour to India as well as to the Kingdom of Saudi Arabia and underscored the warm and friendly ties between both countries,” H.E said. “In Saudi Arabia, the Group has initiated several far-sighted expansion projects and created employment opportunities for Indian and Saudi nationals. All this positions it to play a leading role in the Kingdom’s bright future.” H.E added.

LuLu, which has a strong Indian network of food processing and logistics centers for exporting bulk products to the Middle Eastern countries, has flown in many exclusive Indian products for this shopping festival that showcases a wide range of food products, agri-produce range with fresh fruits and vegetables, as well as meat and seafood. To complete the Indian culture experience, trendy high-street fashion as well as a curated collection of designer wears for festivals and weddings are made available.

Speaking at the inauguration, Mr. Shehim Mohammed said: “The LuLu Group International is at the forefront of India-GCC trade and in 2022, we exported nearly USD 185 million worth of Indian products to the GCC. In 2022, LuLu Saudi alone imported nearly USD 58 million worth of Indian products. With our network of food sourcing and logistics centres across India, food processing units and LuLu’s own-label food products as well as a cohort of skilled fashion buyers who help our garments and clothing department to stay ahead of the trend, we are well-prepared to treat our shoppers with truly festive “Utsav” shopping.”

India Utsav will run till January 30 and feature a promotion on India’s best regional cuisines and super deals on all Indian products and fashionwear across LuLu Hypermarkets and online on its shopping website www.luluhypermarket.com and mobile app.