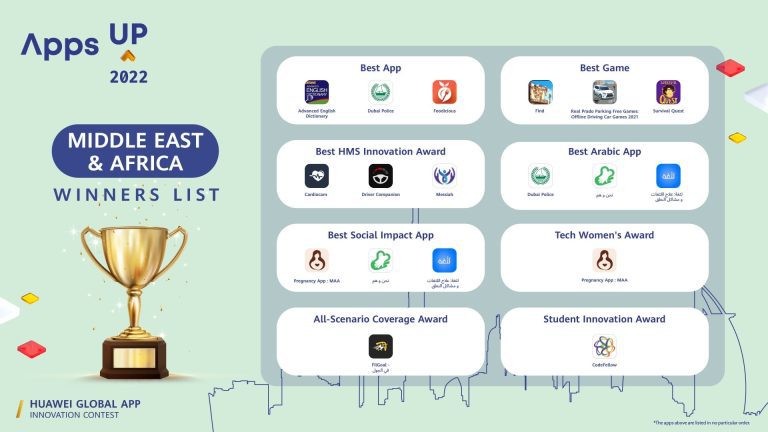 Dubai –: Huawei, one of the world’s largest technology providers, has announced the conclusion of the Apps UP 2022 Global App Innovation Contest, along with the winners of this year’s edition. With literally thousands of submitted apps, the competition was tough, but the 14 apps that stood out in the Middle East and Africa (MEA) were awarded a total of $220,000 in cash prizes.

The fact that 5,000 teams signed up and 2,500 apps were successfully submitted illustrates the widespread interest among developers. Notably, Apps UP’s popularity in the Middle East and Africa soared, as it was the highest of any region in the world outside of China.

The winners were selected based on the highest votes and under eight categories that summarized the focus of Apps-Up contest to bring to life breakthrough ideas and add value to users’ lives. The list of winners was as follows:

Lu Geng, Director of the Middle East and Africa, Huawei Global Partnerships & Eco-Development, Huawei Consumer Business Group, said: “The Apps UP Global App Innovation Contest is one of the initiatives that Huawei is particularly proud of. I hope that, as a technology leader, we will keep motivating the developer community to create apps that contribute to the greater good and advance our vision of an ecosystem that intelligently links everything. A piece of advice I have for developers is to consider the onboarding experience more thoroughly and to allow users try the app so they can realize what it offers while identifying any potential issues.”

The Dubai Police app was among the finalists who won multiple awards: the prestigious Best App Award and the Best Arabic App Award. Commenting on this impressive achievement, Major General  Khaled Nasser Al-Razooqi, General Director of Artificial Intelligent Department – Dubai Police said: “Dubai Police is committed to being an innovation pioneer, and Huawei Mobile Services enables us to serve Dubai residents with next-generation smart services that simplify their daily lives and maximize their happiness. The Dubai Police app makes it easy to locate nearby police stations, report minor traffic accidents, pay fines, and resolve any other Dubai Police-related issue. Our participation in Apps UP 2022 was an enlightening and creative adventure that every development team should experience.”

Huawei’s Global App Innovation Contest (Apps UP) is one of the most exciting and rewarding initiatives tailored to meet the demands of the global and regional developer community. In addition to the lucrative prizes, Huawei provides talents with the knowledge, mentoring, and support they need to bring their breakthrough ideas to life, paving the way for a smarter AI future for everyone. Participants also have the opportunity to achieve global recognition by reaching AppGallery’s 580 million monthly active users around the world. Currently, over 6 million registered developers take advantage of Huawei Mobile Services’ (HMS) revolutionary features, which enable the hassle-free development of high-quality apps.