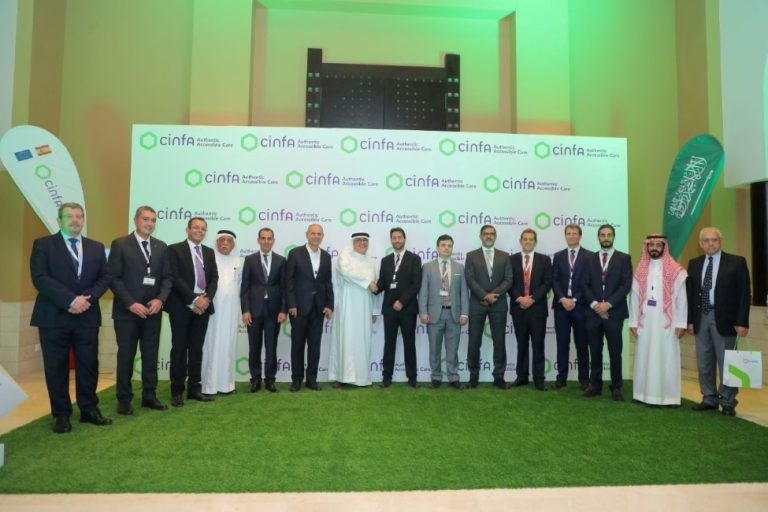 Jeddah, KSA-: The European pharmaceutical major, Cinfa, confirmed, in a launch event celebrated last Thursday, 10th in Jeddah, its plans to expand and reinforce its presence in Saudi Arabia, as part of its regional strategy to provide authentic accessible care to patients and the community.

Cinfa made its debut in the Saudi Arabian market in 2018 and over the years the presence of its products has steadily increased in the market. “Middle East currently represents our largest international market at Cinfa and we plan to consolidate our presence in the region with our launch in the Saudi market, becoming one of the leading players here and covering 10 to 15% of the market in every therapeutic area in which we operate. To achieve this, we focus both on private and institutional market, and we are in constant touch with the stakeholders of the healthcare sector in Saudi to serve them better”, said Mr. Franc Vives, Chief International Officer at Cinfa. The company has built a complete portfolio of 14 prescription drugs that covers different therapeutic areas, including cardiology, urology and central nervous system.  “Our portfolio is under continuous review and growth to meet the needs of the Saudi Arabian market,” added Mr. Vives. “In the coming years, we will continue to expand it with very interesting new molecules such as amlodipine valsartan hydrochlorothiazide, amlodipine olmesartan hydrochlorothiazide, vildagliptin metformin, sitagliptin or apixaban, indicated to treat diseases as hypertension, diabetes, and anticoagulation” he said.

In KSA, the cardiovascular disease and diabetes have become a very serious health issue. 40% per cent of the KSA adult population has high blood pressure (hypertension), significantly higher than the global average of 30%, according to the Saudi Arabia Ministry of Health. Additionally, nearly 19% of the population in Saudi Arabia have diabetes, according to the International Diabetes Federation.

“With our presence in KSA, we aim to provide European quality and affordable medicines for these and other health conditions, working hand in hand with healthcare providers and healthcare authorities”, stated Mr. Vives.

Mr. Yasser Al-Naghi, CEO of Cigalah Trading Company reminded us that “The Saudi Arabian pharmaceutical market is one of the main Markets in the Middle East, with 37 billion US$. And for a growing market with state-of-the-art infrastructure such as ours, to count on international partners as Cinfa is crucial to keep the level of our health system and guarantee that our citizens have access to all the treatments they need”.

With over 50 years of experience in the pharmaceutical industry, Cinfa is an absolute leader in the Spanish market, both in terms of values and drug units sold in retail pharmacies, and is present in over 60 countries worldwide, where it is well acclaimed for its focus on safety and quality.

“In Spain, there is an average of nine Cinfa medicines per household. Our commitment is to adhere to the strictest safety and efficacy requirements, and we want to bring this pledge to the Saudi market as well, so that people of this country benefit from our quality equally accessible to everybody,” said Julio Maset, Chief Scientific Officer, Cinfa.

Cinfa debuted in the Middle East market in 2013, with its lunch in UAE. “It has been already 10 years since we set foot in the region and, as per the IQVIA Q2 data, we are leaders in units in our molecule’s universe with a current portfolio of 27 products,” noted Mr. Tamer Ghonim, Cinfa Middle East General Manager.

The second market Cinfa entered after the UAE was Kuwait in 2014, where it currently has nine products in the market, and the third country was Qatar in 2017 where 11 products of the company are available nowadays.

Now, Cinfa aims to reinforce its presence in Saudi Arabia as the next step in its internationalization strategy.