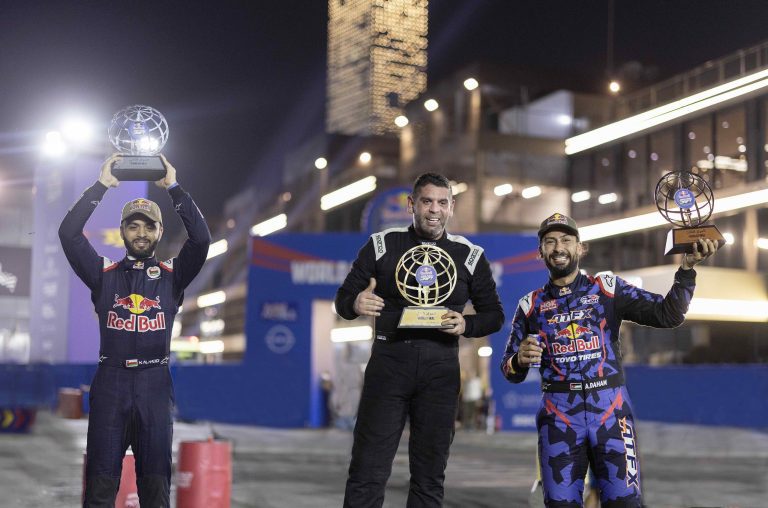 JEDDAH: After more than 12 months of competition, the 2021/2022 series of the Red Bull Car Park Drift concluded in dramatic style with Hisham Al Khatib of Egypt being crowned the King of Drift in the World Final in Jeddah, Saudi Arabia.

Grandstands packed with thousands of excited fans cheered on 24 drifters from 18 different countries at the Jeddah Corniche Circuit, the largest entry list in the event’s 14-year history.

With drifters from Mauritius to Jamaica, South Africa to Azerbaijan, and all the Gulf countries represented, the competition for the title could not have been fiercer in a sport where the smallest mistake can be the difference between winning and losing.

After posting the top score in the first round Al Khatib set the standard early before saving his best performance for the Final 4 round where he took out the top spot over Haitham Al Hadidi of Oman, and Iraq’s Ahmad Daham.

Speaking after his victory as he was surrounded by emotional drifting fans, Al Khatib couldn’t hide his sheer joy at taking the title. After years of national victories, the World Final crown had always eluded him, “I worked for this for 8 years for this result and thanks God, I have it now. It was a great experience for me to compete with these drifting legends, I am so happy and so grateful,” he said.

The emotion of the crowds was a signature piece of this year’s Red Bull Car Park Drift conclusion, Jeddah playing host to the World Final for the first time at the infamous Jeddah Corniche Circuit, known as the home of the Saudi Arabian Grand Prix.

The magnificent track and electric energy from the stands was not lost on the Red Bull Car Park Drift’s talismanic leader, drifting legend, Abdo Feghali, who celebrated the inaugural World Final in Saudi, “This was a dream event from start to finish, the track was so fast, so technical. It could almost have been anyone from the Top 8 who won, the standard was so high, but all credit to Hisham, what a performance from him.”

Feghali added, “The fans had so much passion, they were loving every minute and I can’t wait to get back here for another Red Bull Car Park Drift and to give the talented Saudi drifters a chance to claim their place on the podium.”