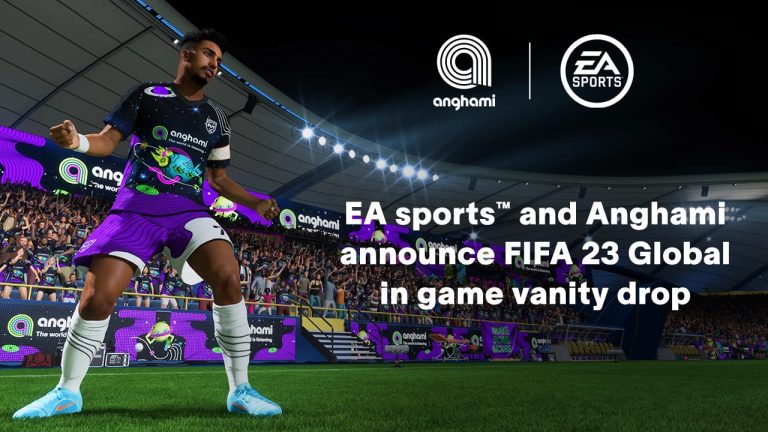 Users can play The World’s Game in an Anghami designed kit in FIFA Ultimate Team, VOLTA and Pro-Clubs.

FIFA 23 players, globally, will now be able to access an Anghami themed kit and stadium design in FIFA Ultimate Team. They are also able to customize an avatar of their own with an Anghami look in both VOLTA and Pro-Clubs.

The creative direction of the kit was inspired by Anghami’s vibrant new positioning and rebranding that aims to empower Arab youth everywhere to create and connect with the world. With its tagline “The world is listening”, Anghami brings its new identity to the screens in a cool, bold and engaging way.

Qossay Alsattari, Anghami’s Distribution Partnerships Lead, commented: “The synergies between music, video gaming and football are unparalleled, allowing us to offer our audiences unique innovations that resonate with them and enriches their entertainment experience. We are quite excited to have FIFA 23′ players across the world access and enjoy the Anghami Kit and to showcase their best kicks with our playful branding.”

The vanity items will be available in game from Friday 23rd December till Thursday 30th December, and can be unlocked through Squad Building Challenges.

Earlier in the year, EA SPORTS had partnered with Anghami to celebrate the release of FIFA 23 with a special track and music video titled ‘Merengue’. The track was written and performed by Saudi based rapper and hip-hop artist, Lil Eazy and produced by DJ Outlaw and Sarah Nabil.

In July 2022, Electronic Arts released details on EA SPORTS FIFA 23, available worldwide on September 30, which will feature updates to its groundbreaking next-gen HyperMotion2 gameplay technology† that elevates every moment on the pitch and much more. With 300 individual licensed partners, giving players access to more than 19,000 athletes across 700 teams, in 100 stadiums and over 30 leagues around the world, FIFA 23 is the place you can play in iconic competitions such as UEFA Champions League, UEFA Europa League, UEFA Europa Conference League, Premier League, Bundesliga, LaLiga Santander, CONMEBOL Libertadores and CONMEBOL Sudamericana.