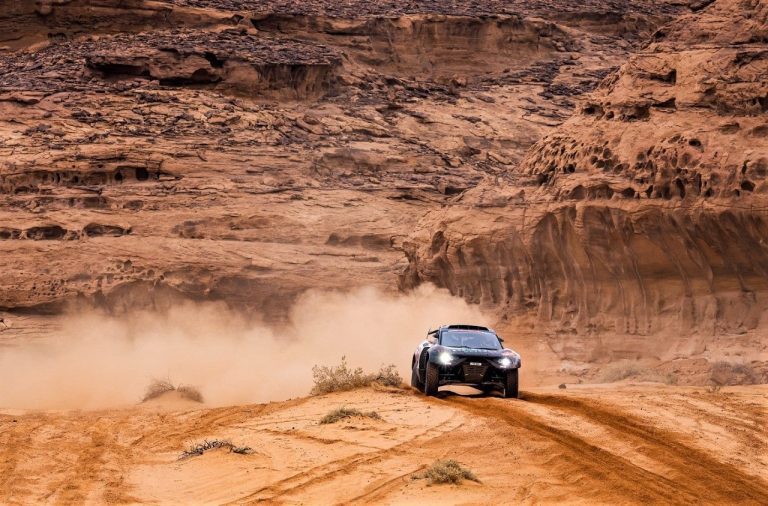 Chicherit and Alex Winocq in their Prodrive Hunter recorded a memorable stage win by 3 mins 26 secs from the Toyota of South African Henk Lategan, with Argentinian Orly Terranova a close third on the day in his BRX Prodive Hunter.

From early morning, rain created pools of water along the 447km stage from Alula to Ha’il, creating extra challenges along an already demanding route passing through a series of canyons.

With the weather worsening as the leading cars reached the 378km mark, the race management decided it was no longer possible to guarantee competitor safety. The vehicles were halted and headed back to the bivouac in convoy, with the stage results at that point counting.

It meant a great turnaround in fortunes for Chicherit and Terranova in particular, and for the entire BRX team, following an almost unprecedented series of punctures which had dropped all four Prodrive Hunters from contention the previous day.

Also impressing on the day, despite two punctures, were Lithuanians Vaidotas Zala and Paulo Fiuza who recorded the seventh fastest stage time in their Prodrive Hunter.

Sebastien Loeb, the 2022 Dakar runner up, had set off eagerly looking to secure valuable points in the World Rally Raid Championship after his puncture problems 24 hours earlier.

The nine-time World Rally Champion had more bad luck when forced to stop for repairs to his BRX Hunter, losing 20 minutes, but was soon making up lost ground before the stage ended prematurely.

Partnered by Alex Winocq, Chicherit duplicated the form which brought an historic first victory for the Prodrive Hunter in the Rallye du Maroc in October.

Tackling his 15th Dakar after finishing fourth last year, Terranova produced another stirring recovery alongside Spaniard Alex Haro to underline the power of the Prodrive Hunter.

A delighted Chicherit said: It’s great. We were on a good pace without pushing especially hard, just keeping the same strategy that we had from the start of this rally.

“Sure it’s upsetting what happened yesterday, but now we’ve proved what we can do so we’ll stay focused and do the rally the way we planned by getting some good times, and some points for the World Rally Raid Championship.”

Zala commented: “That was a good day. We’re really happy with the car in the stage, trying to be careful in the rocky sections, but after some tweaks overnight we’ve turned a corner.”