BFGOODRICH® Tires, In Partnership With The Dakar Rally Organization And Filipinos For The Saudi Green Initiative Association Conducts Desert Cleaning Drive Amidst The Event 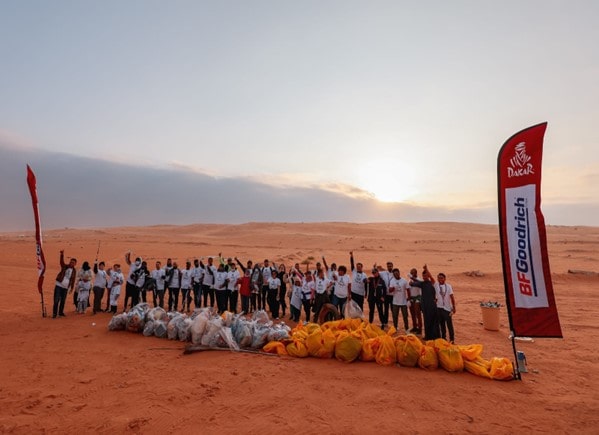 On 9 January, marked as a rest day during the race, BFGoodrich, the official tire partner of the Dakar Rally since its 2002 edition, organized a desert cleaning drive in partnership with the Dakar Rally organization and the Filipinos for the Saudi Green Initiative association. In Riyadh, 40 volunteers from the public joined hands with the on-ground teams in collecting over 70 large trash bags to be disposed of responsibly.

The cleaning drive took place as part of the 45th edition of the Dakar Rally raid currently being held between 31 December 2022 and 15 January 2023. In its efforts to unite the off-roading community, volunteers were joined by Dania Akeel, the first Saudi female to receive a license for Motorcycle Circuit Racing and Abdulaziz Al Fudhili, automotive journalist and racing driver known as Saudi Stig, who participated in the clean-up.

The goal of the drive was to invite the larger community to clean up waste dumped in the desert in order to promote sustainable habits and responsible public land use to preserve the pristine desert landscape of Saudi Arabia.

Over 150 years of heritage, BFGoodrich® Tires has been providing high-performance tires for those passionate about driving in any environment, now with a keen focus around its mission to respecting and protecting these environments. This cleaning drive falls in line with the brand’s first set of CSR initiatives, aimed at increasing awareness on environmental sustainability and safety amongst GCC markets.

The success of this event further emboldens BFGoodrich® Tire’s commitment to sustainability, making way for more CSR initiatives that aim to enable sustainable desert trail use and secure a responsible green future.