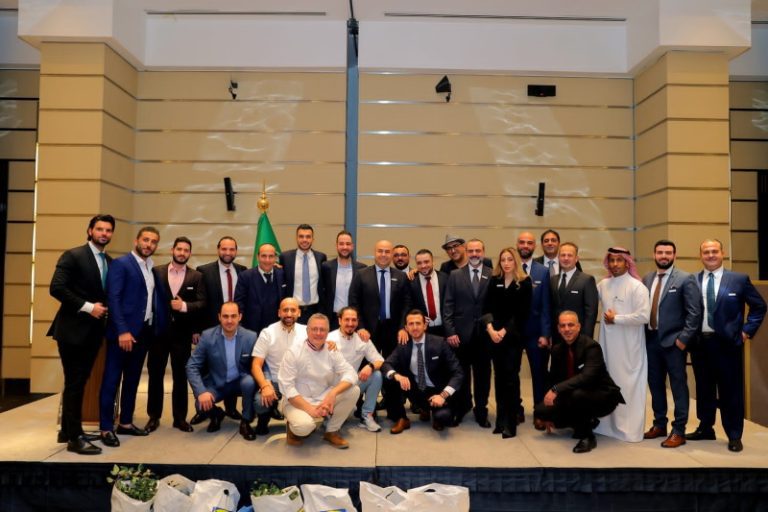 The Belgian Embassy to the Kingdom of Saudi Arabia, as well as Belcolade, a major international chocolate manufacturer for the professional market, producing top-quality Belgian couverture chocolate, and BanoPuratos, the leading Belgian-Lebanese manufacturer and supplier of innovative products of raw materials, utensils, and machinery used in the chocolate, bakery, pastry, and ice cream industries, have celebrated “Belgian Chocolate Night,” in the Saudi capital of Riyadh.

The annual event aimed to celebrate chocolate, Belgium’s most famous product, while also mobilizing efforts to promote the values of sustainability and environmental preservation in cocoa cultivation.

Held at the Hilton Riyadh Hotel, the event was attended by Andrej Barth, Consul of the Kingdom of Belgium in Riyadh, as well as a number of government officials, members of business councils and other economic sectors, and media professionals from various public and private organizations.

The ceremony saw the unveiling of a 3.5-meter-tall chocolate replica of Mount Tuwaiq in Saudi Arabia weighing 150 kg. It was created by the famous chef Stephan Leroux. The BanoPuratos group was inspired by the wise words said by the Saudi Crown Prince Mohammed bin Salman: ” The Saudis’ strength is like that of the Tuwaiq mountain, unbreakable, unless this mountain is leveled and equaled to the ground.”

The Belgian Consul spoke highly of the distinguished and constantly evolving relations between Saudi Arabia and Belgium, reaffirming his country’s commitment to further strengthening its ties with the Kingdom.

He stressed that the investment environment created by Saudi Arabia, together with the kingdom’s advanced legislation, has been a major factor behind attracting Belgian companies to Saudi Arabia in order to make the best use of their expertise to build a sustainable investment base.

According to the Belgian Consulate in Riyadh, Belgium produces 700,000 tons of chocolate per year, with 80% exported.

For his part, Mohammed Hashwi, CEO of BanoPuratos Group, said that the group has chosen Riyadh as a preferred destination to celebrating the Belgian chocolate night for many reasons, including the fact that Riyadh is the capital of ‘good taste’, in addition to being a leading city for hosting major entertainment events, offering an unparalleled mixture of uniqueness, suspense, and modernity.

He noted that Saudi Arabia was the world’s 11th largest importer of chocolate, as its chocolate imports in 2020 amounted to $569 million.

“According to a recent study conducted by the strategic consulting and market research firm ‘Report Ocean’, the Saudi chocolate market is expected to grow at a compound annual growth rate of 4.5% between 2022 and 2028. Saudi Arabia is the Middle East’s largest market for chocolate and its products, reflecting Belcolade’s strong interest in the Saudi market, as it enjoys a high taste that recognizes the value of fine chocolate,” he continued.

Meanwhile, Tamam Al Nesouli, General Manager of the Sweet Mix Company, a BanoPuratos Group affiliate in Saudi Arabia, spoke about the challenges facing the cocoa tree. He stated that BanoPuratos Group is keen to play its full part in enhancing the sustainability of this plant in order to provide the best types of raw materials for manufacturers and produce additive-free, healthy products.

“The group also launched the Cocoa Trace Programme to create an ideal environment in which cocoa farmers can gain the knowledge and skills they need to better manage their farms and preserve the environment. They were taught how to adopt proper scientific methods for the cultivation of cocoa to confront the different challenges they face,” he added.

As part of the company’s commitment to social and environmental responsibility, the ceremony included a presentation on the Cocoa Trace Programme, highlighting its role in supporting sustainability in the chocolate industry and how it contributes to preserving the environment, as well as financing the construction of schools, health care centers, wells, and rainwater tanks in cocoa-producing countries.

The programme is built on three pillars: Highlighting its core value, sharing its results with cocoa farmers, and commitment towards partners to make the cocoa chain more prosperous and sustainable.

Environmental sustainability represents a key pillar in the Kingdom’s Vision 2030. Saudi Arabia is making strenuous efforts towards moving to a more sustainable future in many industries.

Muchachas Mexican Cantina Is Back With Its Popular Saturday Brunch