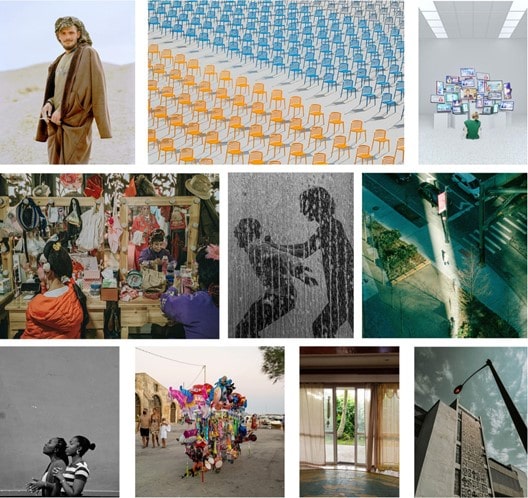 With more entries this year than ever before, the Student and Youth competitions aim to uplift the next generation of photographers and inspire them in the next steps of their photography journey.

The Student competition shortlist showcases bodies of works by 10 students at leading international higher education institutions. For this year’s competition, students were invited to submit a series of five to 10 images responding to the brief In a Changing World, highlighting positive stories of development and progress from across the globe. The shortlisted work shows how these student photographers are responding to the changes in the world around them in diverse and nuanced ways.

Technological progress is examined by several of the projects, such as Encyclopedia of Technology by Bobby Cheung (China Mainland, New York University Tisch School of the Arts, USA), a series of CGI-integrated photographs encouraging us to look at how these innovations have permeated every aspect of our lives; and Resignify by Maria Camila Ramirez Castañeda (Colombia, Universidad de Antioquia), which focuses on how the city of Medellín in Colombia has redefined itself as a leading technological hub.

Elsewhere shortlisted photographers have looked at how local communities have adapted to the swift tide of change, such as in Ephemeral Freedom by Arianna Todisco (Italy, CFP Bauer) which spotlights the Caminanti community, a nomadic Sicilian ethnic minority; Keep the Yunnan Opera by Long Jing (China Mainland, Yunnan Arts University) which follows a traditional regional theatre troupe whose art form is in decline; and Born of Sand and Sun by Petra Bašnáková (Slovakia, Tomas Bata University in Zlín, Czech Republic), a series exploring the strength of the Bedouin community’s relationship to the desert, which sits at the heart of their culture and identity.

Family legacy was also the focus of several projects, including It’s a Girl Again by Lidan Xu (China Mainland, Tama Art University, Japan) which presents the photographer’s family’s enduring traditions and attitudes around gender and birth; and ZK1AA by Nelly Farmiloe (New Zealand, Photography Studies College, Australia), a series piecing together the last remaining fragments of her grandparents’ lives in the Cook Islands.

Observing a world in a state of flux, several of the shortlisted photographers have also turned their cameras to the things that keep them grounded, such as in Look Up to the Sky by Amy Gajjar (South Africa, Red & Yellow Creative School of Business), which juxtaposes the local landscape against the sky above, inviting us to take a moment to appreciate the beauty that can be found in the mundane; Expressions of Worship by Mary Ashokeji (UK, Ravensbourne University London) who bears witness to the intimacy of a worship event at a local church; and Mirage by Kaiyu Dong (China Mainland, School of Visual Arts, USA), where the photographer dissects their own daily routine to find the cracks and accidents that break the repetitive pattern of our quotidian lives.

The winner of Student Photographer of the Year 2023 will be selected from the 10 students and announced at the Sony World Photography Awards 2023 ceremony in London on 13 April. The overall winning university will receive Sony digital imaging equipment worth €30,000.

This year’s Student shortlist was judged by Eliza Williams, Editor at Creative Review.

The Youth competition shortlist features works by 7 photographers under the age of 19. This year, entrants were invited to respond to the theme Your Everyday and share their unique view of the world around them.

Several of the shortlisted photographers turned their cameras to fleeting childhood moments. In her photograph Liberty McAuley (UK, 15 years old) captured two children playing tag in a water fountain on a hot summer’s day. Elsewhere, Edmond Leong (Malaysia, 19 years old) catches the shifting expressions on the faces of children in a crowd scene, while Natálie Navrátilová (Czech Republic, 18 years old) ponders the world we are leaving behind for the next generation in an image of children swimming amidst plastic fish. Elsewhere, photographers turned to their environments and surroundings for inspiration, such as Hai Wang (China Mainland, 16 years old) who photographed rows of perfectly aligned and deserted chairs at a school opening ceremony, highlighting the impact of the pandemic on large social gatherings. Capturing a split-second moment from a car, Eason Zhang (China Mainland, 14 years old) photographed a dog with its head hanging out of the window, juxtaposed with the reflection of its owner in the rear-view mirror. Meanwhile Katarzyny Akermana (Poland, 19 years old) shows the wild beauty of the animal world in a dramatic image of a horse and rider, shot against the setting sun. Reflecting on identity through her self-portrait, Emily Cho (Republic of Korea, 16 years old) shows how the stresses of her studies have imprinted upon her identity.

Youth Photographer of the Year is judged by Eric Schlosser, Art Director at the Tbilisi Art Fair, Georgia. The winner will receive a range of Sony digital imaging equipment to nurture their vision.

The overall winners in the Student, Youth, Open and Professional competitions of the Sony World Photography Awards 2023 will be announced on 13 April 2023. For more information about upcoming announcements and winners please visit www.worldphoto.org