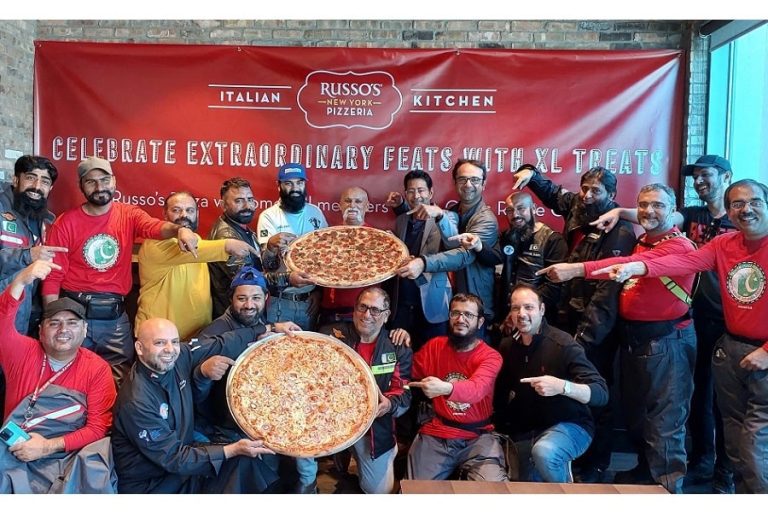 Dubai, United Arab of Emirates-: Russo’s proudly organized and hosted a giant pizza party at their restaurant in Springs Souk for members of the ”Cross Route Club” –25 bikers who have just arrived on a layover in Sharjah, as part of their incredible cross-country bike riding mission which will see them covering a total distance of 14000 km to perform Umrah in Makkah.

The stopover in the UAE comes after a grueling 2500 km 15 days motorcycle trek, which began in their hometown of Lahore, Pakistan. Clarifying their mission, the Club’s leader Mukaram Tareen explained that the bikers are on a “spiritual journey to light”.

The bikers have expressed great love for the UAE and the hospitality of its people and residents and will shortly be proceeding to the Saudi border towards Riyadh. The group anticipates a further 10 days of rigorous riding before reaching Makkah.

Speaking on the occasion, Asghar Ali from Prime Hospitality, which operates the Russo’s franchise in the UAE stated that “At Russo’s, we celebrate and share in the UAE’s long held tradition of warm hospitality and welcoming travelers and guests from across the globe. We are delighted and honored that Mukaram and his fellow bikers stopped-by, took a break, enjoyed Russo’s unique New York style Pizza and allowed us to play a small part in their most memorable journey”.

Russo’s is home to the largest pizza in the UAE (28 inches), which can easily serve up to 10 people. This spectacular pizza goes above and beyond to comprise a variety of toppings, all of which are hand tossed and can accommodate a choice of homemade, made-from-scratch sauces.

Established in 2009, Prime Hospitality has grown to become a hub for innovative F&B brands. As the master franchise owners for Russo’s New York Pizzeria in the UAE, Prime Hospitality has 3 branches across Dubai. Established in 1978, Russo’s New York Pizzeria is a family owned business which has continued to expand nationally across the US, as well as globally, with Russo’s Italian Restaurant widely recognized as a fine dining establishment. In the UAE, Russo’s is known for being home to the largest pizza sizes nationwide, especially the XL (28 inch) variant which serves as the largest pizza in the UAE.

Experience the “7 Shades of Love” at One1Dinner Show & Lounge Dubai

Every Pickl Customer Goes Home With Jeff This Valentine’s Day