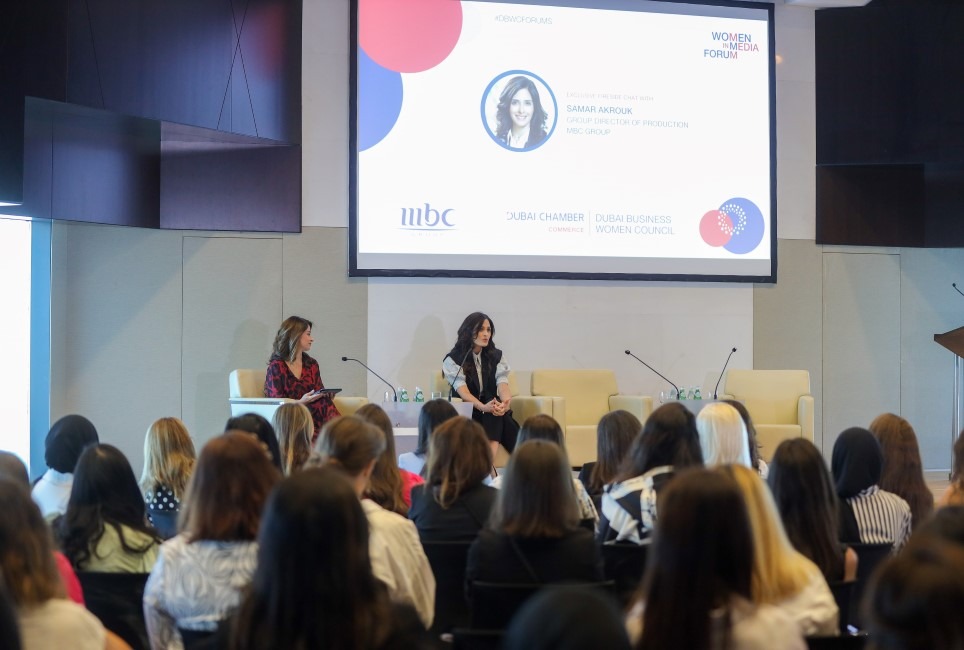 The Dubai Business Women Council has organized the “Women in Media” forum in collaboration with MBC GROUP – the leading and largest media organization in the Middle East and North Africa (MENA) – to discuss the crucial role that media organizations can play in increasing the representation and accountability of women in the media, on screens, and in content. The event is part of the council’s #DBWCFORUMS initiative, which hosts a series of talks that aim to raise awareness around the challenges and opportunities that concern women in various industries.

More than 125 attended the event, which focused on the importance of maximizing women’s strengths and potential to advance media work, develop strong female media role models, increase gender diversity, and foster a culture of success in the media industry.

In addition to discussing the mechanisms and means that ensure balanced female representation in the media, the participants discussed the best practices adopted by media leaders and officials as well as the value of diversity in the workplace and the necessity of utilizing women’s potential to advance a targeted and positive media message.

A memorandum of understanding (MoU), which was announced during the forum, aims to coordinate and align both parties’ efforts in providing their female employees and members with ongoing access to mentorship programs, workshops, and speaker sessions based on skill building needs.

On behalf of the Council’s Board Members, Nadine Halabi, DBWC’s Business Development Manager lauded the partnership with MBC GROUP, describing it as strategic and purposeful.

“This collaboration is of special importance as it unites two partners who value women and recognize their critical contribution to the economy. We are thrilled to collaborate with MBC GROUP and look forward to coordinating our future efforts to develop the abilities of women and female business owners while also assisting them in acquiring media and marketing skills that can advance their careers.  The council will continue to be committed to harnessing all available resources to serve its members and the business community, by organizing specialized events and seminars that add value to their personal and professional lives.”

Samar Akrouk, Group Director of Production at MBC GROUP, who held a fireside chat on the sidelines of the event, commented: “MBC GROUP is proud to be a progressive trailblazer – on and off screen – in promoting gender equality. Throughout our organization and across most departments we have women in top leadership positions, as well as women that are identified and set on leadership tracks. However, we are progressive enough to look at ourselves and say we can do more – and we will do more.

“Building on what has been achieved so far, we believe that by increasing engagement and transparency – as well as engaging in meaningful collaborations and partnerships – we will make our employees feel more supported and valued. Collaborations, meaningful sponsorships, and women-led initiatives such as this one are the key to creating a positive and healthy work culture that promotes ally-ship, growth and success.”

During her fireside chat at the event, Akrouk highlighted self-limiting beliefs, and how they can affect women in the workplace, as well as offering tips on how to overcome them. She also offered tips for those who want to work in media in the form of the qualities sought-after in a great hire or mentee.

The forum had three panel discussions, with the first of which discussed the role and responsibility of media outlets in creating positive role models for regional audiences, while the second one touched on the steps and policies that led to better inclusivity and gender parity in media organizations. The third segment talked responsible and impactful advertising and how to push boundaries through strategic messaging in society.