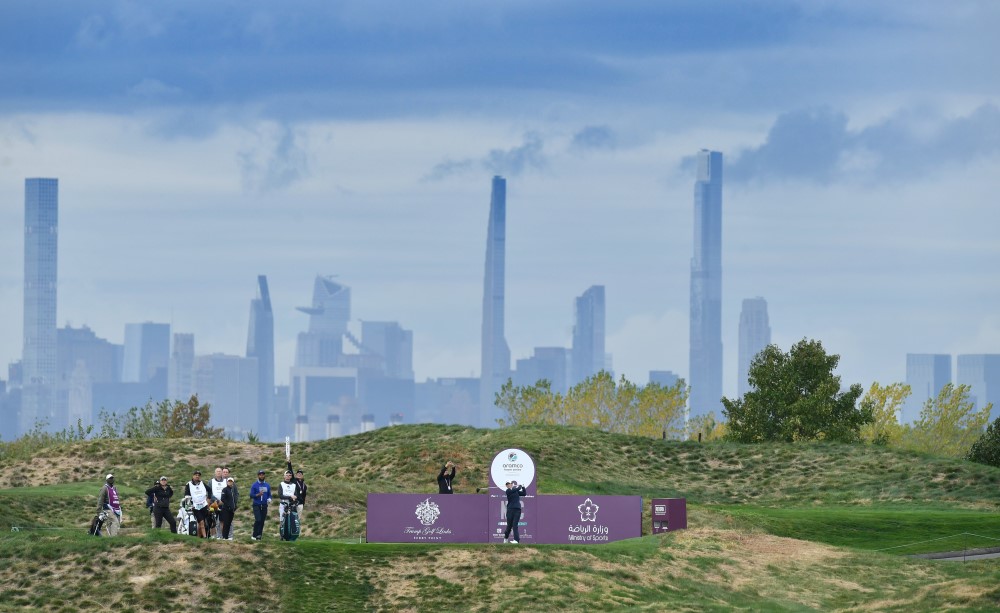 New York–: The world’s top golfers battled the elements in challenging conditions at the opening round of the Aramco Team Series – New York. Belgium’s Manon De Roey overcame the wind and rain in the Big Apple to take the early lead in the individual event at Trump Golf Links on the Ladies European Tour.

De Roey, who clinched her first LET title winning at the Aramco Team Series – Bangkok earlier this season, was flawless with a bogey-free round of 68 to finish on four-under-par.  Only four players at Trump Golf Links were able to shoot under par with better conditions expected for Friday and Saturday for a course favoring the long hitters.

“It was tough out there. We had some rain, strong winds and just tried to keep it together for the team as well – being bogey-free today which is nice. I knew today was going to be tricky but I think for the next few days it’s going to be sunny and 19 degrees, so I’m looking forward to that. It can only get better from today, so I’m looking forward to it,” added the Belgian 30-year-old.

De Roey is in fourth place on the LET’s Race to Costa Del Sol standings with a good showing in New York contributing to valuable points with just three tournaments to go in the 2022 season.

Nelly Korda, champion at the last Aramco Team Series event in Spain, sits behind De Roey after a two-under par round of 70. The American world number 4 showed her class in the wind on her back nine – with her team of Noora Homulainen, Celine Herbin and amateur James Rawson in the mix in the team event also in second place.

“The weather wasn’t that great so we were all saving each other and thankfully we all had each other’s back,” said Korda.  “We played pretty well today. It was pretty windy and then it started kind of raining toward the start of our back nine and it stopped around on the 14th and the wind died”.

Talented 18-year-old rising star Pia Babnik joins Korda on two-under with four birdies and just the one bogey on her second hole in a controlled round of golf.

“I tried to really keep my ball flight much lower in the wind – I definitely needed to make some adjustments,” said Babnik.

Irish star Maguire said: “It’s a good test out there and was playing long with lots of woods and hybrids needed. It will be a little kinder tomorrow and we can make plenty of birdies to keep it going.”

Native New Yorker Annie Park enjoyed her day on the links and first experience of the unique team and individual event.

“This is my first time playing at this golf course and it felt like I was in Scotland today with the golf course and the weather. This is such an individual sport, and to have a little bit a team aspect into it, I think it’s fantastic with a lot on the line which is individual and team.”

There is a new format this year for the Aramco Team Series where the teams will compete over only 36 holes – the Thursday and Friday of the tournament – with $500,000 prize-money being split between the lowest scoring fourballs. Saturday’s final day of play will see only the lowest scoring 60 players and ties from the opening two days return to the course to battle it out for a share of another $500,000, this time in individual earnings.