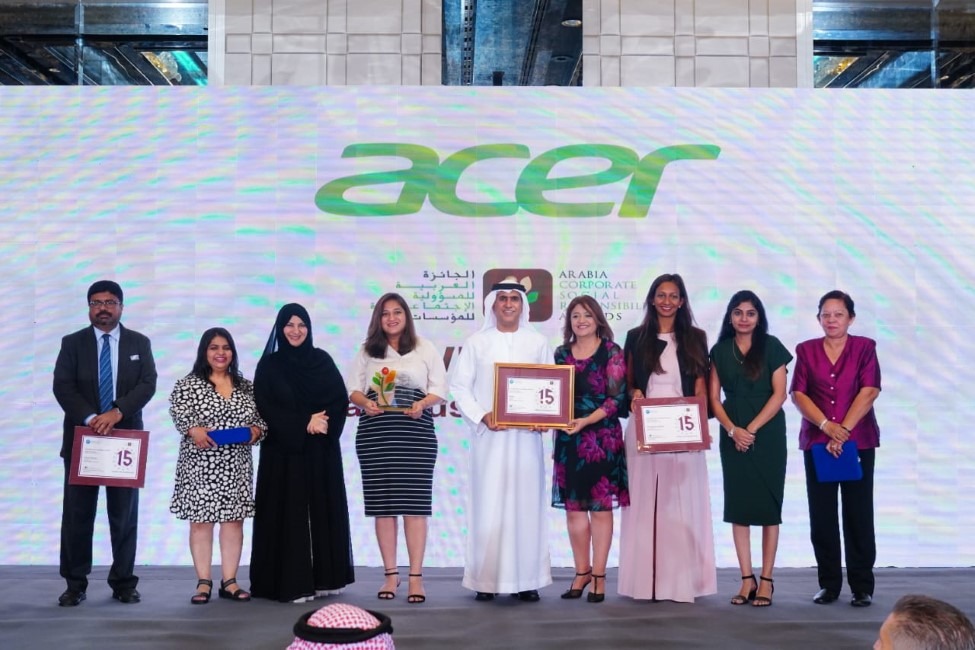 The Arabia CSR Awards, the premier sustainability award platforms in the Middle East and North Africa region, celebrated its fifteenth anniversary, a laudable feat given the developments and challenging events that have taken place across the region in the past decade and a half.

The organiser of this platform – the Arabia CSR Network – celebrated this anniversary during its annual awarding ceremony for the winners of the Arabia CSR Awards on October 5, 2022 in Dubai. The widely known Awards is hailed as the “Green Oscars” and labelled as the Arab region’s leading homegrown sustainability benchmark.

H.E. Eng. Sheikh Salem Bin Sultan Bin Saqr Al Qasimi, Chairman of the Department of Civil Aviation RAK and Member of the Government of Ras Al Khaimah Executive Council quoted: “The Arabia CSR Network continues its efforts to take decisive steps to advance and push the sustainability envelop in the Arab region by conducting a yet another successful cycle of Arabia CSR Awards. I pledge my necessary support in all its local, regional and global initiatives to enable, develop and grow sustainability in the country and beyond. Through constructively working together, we will be able to bring about positive change in the climate issue, become a global center for a sustainable and green economy.”

The Arabia CSR Awards were launched at a time when CSR and Sustainability was in the infancy in the Arab region, and the initiative was created to educate, encourage and motivate organisations to espouse social responsibility, ethical business and transparency.

Arabia CSR Network Founder, President & CEO Mrs. Habiba Al Mar’ashi gave the welcoming address where she shared interesting information about the Award’s fifteen-year long journey. Mrs. Al Mar’ashi said, “The Arabia CSR Awards is not just a simple recognition programme, but a dynamic platform that boosts education and ability, and expands experiential knowledge and best practices. This helps bring to the fore champions and role models in the Arab world.”

The Arabia CSR Awards had 15 categories this year, providing ample choice to entrants and interested parties to select the category most suitable to their business and operations.

The evaluation was carried out by an independent jury panel comprising of experts from various parts of the world. The results were run through an external assurance and validated by a noted third party provider.

The scores and comments of the jury were distributed to the applicants, in a bid to help them out by pointing out and explaining the gaps and strengths, as well as by providing recommendations. This procedure has helped many organisations to fine tune their sustainability strategies and plans and to also attain higher levels of maturity and value. Multiple time winners have frequently acknowledged the pivotal role of the Awards and in particular, the jury assessment in enriching their knowledge and expertise related to Environmental, Social and Governance practices.

For the early years of the formation of the Awards, they have been conducted via an electronic portal that enables registration, application, submission and evaluation processes in a digital format, thus, ruling out the need for any paper based process. The eco-friendly characteristic of the Awards is further upheld by conducting the awarding ceremony as a Carbon Neutral event, whereby any emission resulting from transportation or other activities is balanced out through Carbon Offsetting.

The stature of the Arabia CSR Awards is widely recognised by sustainability experts and leaders around the globe. The stringent criteria based on global standards and benchmarks, and the rigourous process of compiling and presenting information along with extensive supportive evidence, message from organisation’s highest authority, as well as videos, pictures etc. have distinguished the Awards as unique and unparalleled. Held in high regard, the Arabia CSR Awards have thus become a much coveted and fiercely competed for set of awards that brings together hundreds of players from public, private and civil society sectors year after year.

Likee Selected to Livestream The Game Awards across the World